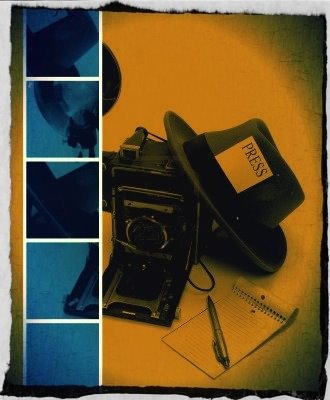 It is my honor to speak with a number of outstanding journalists out there doing the work of the Lord. In the old days they came like a gaggle of geese in double-breasted suits, brash monochrome editions of a 1948 Jimmy Stewart with notebooks in hand, Beaver brushed fedoras cocked back, media passes in their hat bands, and shoving each other to nab the scoop. The decades passed and it may be argued that little really changed until the Woodward and Bernstein era of Watergate-investigative-reporting and the CBS-60-minute -gotcha”-specialists. Even that was less of a change in technology and more of a change in tone. It was the advent of skepticism of institutions, including and especially the United States government. The real change came with the appearance of—no, not the computer, per se—but, more specifically, Steve Job’s iPod. The democratization of journalism sent waves of (predictable) snobbish cynicism through places like the Columbia School of Journalism. Fear that the “blogosphere” with “podcasts” of everything from “Grammar Girl” (weekly reporting on the world of grammar, a favorite of mine that I have enjoyed for years) to the groundbreaking work of the Drudge Report, would taint the professional standards of journalism was as misplaced as railroads’ fear that planes would somehow ruin transportation. Of course, the democratization of journalism did not destroy the Schools of Journalism. It just changed them, and, in the last measure, may have saved them from irrelevancy.

The democratization of journalism has, happily, created a growing field of what I refer to as the Next Generation Christian Journalists. They are the young men and women who are often flying beneath the radar of the old media outlets, but whose creativity and insights are spawning growing audiences of those who want to go deeper than the headlines and snippets of factoids. These new era reporters are increasingly being recognized by Christian (and broader market) publishers as an important component in moving their products to market. In my own case, I have met several of these in the past several years. I had the pleasure of meeting one of these journalists this past week. He is a great example of what I am seeing.

His name is Shaun Tabatt from Minnesota. Shaun has a podcast that has grown to thousands of followers across the country and around the world called “Author Talks with Shaun Tabatt.” He distributes his program on his web site, which he has given an absolutely wonderful name: “BibleGeekGoneWild.com.” If that doesn’t loosen you up before you go on for the broadcast I don’t know what will! I asked Shaun about the name and he told me that he wanted a name that was the most outlandish name he could think of. So, he said, he pulled together a number of phrases and compressed them into the end product, Bible Geek Gone Wild! Don’t let the name fool you—and this is the real power of the Next Generation Journalist—the playful expression of the website becomes an accessible entryway into the world of the journalist on his podcast. For there Shaun demonstrated a remarkable giftedness in interviewing. In fact, I would say that Shaun Tabatt is one of the most insightful broadcast journalists I have had the pleasure of speaking with. He not only knew the book, which is remarkable in itself, but, more importantly, he knew what the publisher wanted the audience to know about the book, and he knew what the audience wanted to know about the book. He then provided the questions about myself and about the content and ideas within the book to answer the questions from those angles. In a word it was work—work for me! But that is good. He went through a process that was well thought-out and which, I believe, will help the audience understand the text and even subtexts of the book. I have never left an interview with more enthusiasm for the work of the younger journalists that I see coming up.

I completed my doctoral thesis in 1997. My work centered on Seventeenth Century historical theology. The context for the research was the English Civil War and controversies in the Puritan movements in Wales and England. I spend countless hours of study at the National Library of Wales in Aberystwyth. While researching it was my privilege to handle English Civil War tracts from the Seventeenth Century. I was given cotton gloves at the National Library and allowed to handle hundreds of documents and to scour through what would have been the up-to-the-minute-reporting of that era. Those tracts were the work of young reporters who were plowing new ground in Christian journalism in their day. The democratization of journalism was quite evident in their own day. As John Milton had written his famous Areopagitica (1644) to further the movement to overturn the licensing laws on many books and tracts previously banned and to advance Freedom of Speech as an inalienable right, so these gifted writers took to the print-shops of London and other cities in the Kingdom to advance those rights.

The new generation of Christian journalists are doing the same. On podcasts, in blogs, on social media, and in places where an old fogey like me would not know to look—and, yes, even on television and radio—, they are writing, speaking, and advancing ideas that can save souls, transform lives, and renew cultures for the glory of God and the good of Man. Men and women just like Shaun Tabatt are joining with their predecessor of the Seventeenth Century, John Milton, in declaring,

“Give me the liberty to know, to utter, and to argue freely according to conscience, above all liberties” (50).