You are here: Home / Music / Through the Open Door 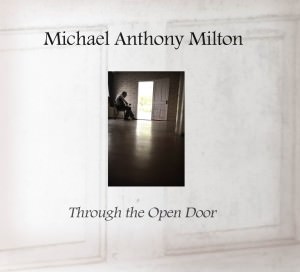 [amazon asin=B004CHP1LK&text=Buy this CD from Amazon.com]

Through the Open Door is the third compact disc musical album by Michael Anthony Milton, released on February 1, 2011. The album features 13 songs, with special guest Michael Card, and is released under the label Music for Missions in conjunction with Bethesda Words and Music.

“Through the Open Door continues in the style of Milton’s previous works as an album which blends folk, bluegrass, rock, and gospel music. Milton uses images of American life to tie the heart of man to spiritual realities such as the sovereignty of God, our sin and it’s ramifications, our redemption in Christ, and the hope of eternity with God. Michael Card appears on lead and backing vocals on the song ‘God is Calling Faithful Men,’ a song Milton wrote about the high calling of serving Christ as an undershepherd over the flock of God.” – Music for Missions

“Riveting … heartfelt and spellbinding music. Milton’s authentic undertone draws from his ability to convey his meaningful lyrics in a practical yet alluring vibe.” – Gina DiFalco, The Celebrity Cafe

“Milton has a great talent for conveying deep spiritual things in an easy-to-understand fashion. His mellow, folk tunes and accessible lyrics will be sure to minister to the hearts and souls of many who hear the album!” – Tom F., Alpha Omega News

“Inspiring and provoking… Each song paints the picture in different situations to encourage and teach a vast group of listeners.” – Tina Leonard, Higher Rock Music

“His music is just as authentic as his lyrics, and might feel just as at home on the front porch of an Ozark mountain shanty as on the stage at the Ryman Auditorium.” – Mike Parker, Examiner.com

Order the Compact Disc through Amazon or through Music for Missions label directly.

MP3s are available through Amazon and all major online sites.

Through the Open Door Liner Notes include lyrics, credits, musicians, and more.