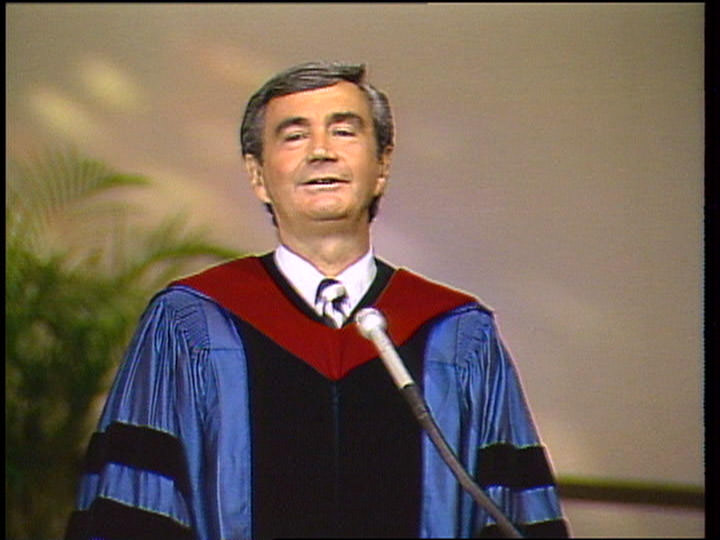 A producer and film crew from Truth In Action Ministries – formally Coral Ridge Ministries — came to our Charlotte campus today to shoot some footage for a special production on remembering the late Dr. D. James Kennedy. The thoughtful visit gave me some reason to reflect and remember my late friend and mentor.

I fulfilled my pastoral internship under Dr. Kennedy. More than that, I first understood the biblical doctrine of God‘s grace through the preaching of James Kennedy. There was a Mike Milton before I heard his message on Ephesians 2:8, 9 and there was a Mike Milton afterward. I had been orphaned and then adopted by my Aunt Eva.   My godly Aunt Eva reared me in the church. She laid her hands on my head and prayed for me everyday of my life. But the hurt and the pain of an earlier childhood trauma left scar tissue on the contours of my soul. I was— humanly speaking — impenetrable to the truth. Thank God that His grace is more powerful than spiritual scar tissue. Through Aunt Eva’s prayers, God brought Dr. D James Kennedy into my life and, like millions of others who heard his presentation of the gospel through Evangelism Explosion, I learned that I was a sinner in need of a Savior. Christ was that Savior and if I would repent and believe in him and receive him as the resurrected and living Lord, I would be saved from the certain punishment to come for my sin.

I also learned about discipleship from Dr. Kennedy. I learned that what some call the “rule of faith” of the Christian life involves faithfulness to the Bible, worship, prayer, fellowship, and witness. Thus, with my wife, we begin the journey—the journey of following Jesus Christ through this life. That journey was interrupted at one point by a divine calling into the gospel ministry. I was blessed to be able to study under Dr. Kennedy as he was founding a seminary. I was even more blessed to be able to study and to work with him personally—a sort of pastoral apprentice to Dr. Kennedy. I will treasure those days for the rest of my life. There’s not one day that I don’t think, “What would Dr. Kennedy have done here?” His influence on my life and ministry cannot be fully measured.

I suspect that in the interview, I’m going to be asked about his legacy and work in my life. I thought about three essential aspects of his legacy at work in my life; and, surely, in the lives of others. Like so many other things in life it is hard to quantify and to categorize human beings and their influence. In fact, I will sum up his influence, his legacy, and his enduring impact on my life and ministry with the initials of the man. Those of you who knew or worked with or around Dr. Kennedy, know that he was often simply called “DJK.” I will use those letters, so familiar, as an acrostic to share my faults about his living legacy.

D— is for the dignity of the pulpit.

One of the greatest things that Dr. Kennedy left me was the critical idea that the pulpit is deserving of the finest scholarship. In his own life he not only was a church planter, a pastor and evangelist, but he was a scholar. He spent every year studying: Greek or patristic history or Hebrew or archaeology or systematic theology or biographies of great theologians or great preachers. He earned his Doctor of Philosophy from the University of New York and did serious research on Emmanuel Kant. More than that, Dr. Kennedy taught us that the dignity of the pulpit required the training of the voice, attention to the details of the components of the sermon and classical rhetoric. Listen to a D James Kennedy sermon and you will be sure to pick up on the meticulous intentionality on the use of logos, pathos, and—he did this so well and was so obviously gifted by the Holy Spirit – ethos, the Aristotelian concept of authority and believability in speaking.

The effect of Dr. Kennedy’s legacy concerning the dignity of the pulpit has had a remarkable impact on many lives. In my life his influence in the dignity of the pulpit called me to pursue a doctor of philosophy degree in Britain. His concept of the pulpit deserving the finest scholarship influenced me to bring whatever scholarship, whatever learning, whatever insights, I received from my research studies, and pour them with affection through the narrow channel of the pastoral ministry, particularly, the pulpit ministry. The fact that I am now a servant in a theological seminary is more of God’s directing the river of my life according to his own design than any trajectory I had about my pastoral career earlier. I am ambitious to be well pleasing to Christ but I’ve never had an ambition to be anything more than a pastor and a preacher. That is all I am now, just in a different section of the Good Shepherd’s pasture.

It seems to me the pastors now and always should be concerned about the dignity of the pulpit. Dr. Kennedy impressed that upon my conscience my pastoral ministry will never be the same. By the way, the “dignity” of the pulpit is altogether related to the fact that we are ambassadors of the King of Kings and Lord of Lords. That is the source of the dignity, never ourselves.

J- is for Joint Operational Ministry.

Now, I would admit that the “J” gave me some pause in my attempt at an acrostic. What I came up with describes one of the most important and important features of the Ministry of my late friend, Dr. Dee. James Kennedy: I call it “Joint Operations.” What I mean by that is the Dr. Kennedy practice and talk the concept of the multiplication and maximization of ministry. He believed that every sermon had within it the possibility of an article, devotionals, teaching series, audio, video, and remnants that could be, with editing, brought together for a meaningful book or other resource for the believer. In other words he wasted no part of any single sermon. He told me one time that he learned this from Charles Haddon Spurgeon. “Imagine,” he reflected, “if no one ever copied down the sermons of Charles Haddon Spurgeon. There would’ve been no Penny sermons going out all over the world. There would’ve been no collection of sermons making up books. They would’ve been no commentaries. In fact we would have no remnants of the ministry of one of the greatest preachers in the Christian church. Charles Haddon Spurgeon maximized and multiplied his ministry to the glory of God into the good of the lost and the church. Therefore, always aim to maximize and multiply ministry.”

He also told me that I should never do ministry alone, but I should always be investing my life in another person, in another pastoral intern, in another believer. This “joint operation” is especially helpful to me now as we are considering, as a seminary, how to leverage the heritage and gifts of our strong multi-campus, residential pastoral education ministry, and, through the use of technology and strategic alliances with Christian ministries on the ground in the global cities of the earth, multiply and maximize the ministry of the seminary. Thus, the legacy of Dr. D James Kennedy is embedded in my own prayerful and strategic thinking about the future of Reformed Theological Seminary and our “global city initiative” in the 21st century.

This “joint operation” approach to ministry, however, is useful for the local pastor in a small, rural community in, say, Iowa, where the pastor is able to have a joint operation of ministry – multiplying and maximizing his own pastoral work — with local newspapers, clubs, other ministries, other churches, and through the use of technology. One sermon preached on a Sunday night in a small church in Iowa can become, through a joint operation approach to ministry, multiplied and maximize so that people on the other side of the world hear the Gospel and believe.

All of this for the glory of God and the good of the people.

My last letter and Dr. Kennedy’s name and in this acrostic about the living legacy of the man is a very easy one for me to come up with.

For Dr. Kennedy, all ministries, finally, had to be focused on the redemptive purposes of God on earth and in the cosmos. He believed that each believer, whether a minister or not, was commissioned by Jesus Christ to not only preach (or just be a “witness” to) the Gospel to as many people as we can through every means available, but also to train others to do it as well. That was his main thing. And I am not ashamed to say that I am not very original. It is my main thing as well.

It is become quite fashionable to quote the great missionary, bishop, pastor and missiologist, Leslie Newbigin. It was Newbigin who said that if a church ceases to become concerned with the mission of God, it, in fact, ceases to be the Church. For Dr. D James Kennedy, this truth was applied to each believer. When we are no longer concerned about the mission of God in the world, the great commission as well as the cultural mandate, we have ceased to live out our destiny as people who were called Christians.

The last time that I saw Dr. Kennedy was just months before he fell ill to the health issue that would, at length, call him home to glory. During that time I will never forget that he opened his arms to embrace me. He looked at me and smiled, as I shook his hand, and said, “Now, that is no way to greet your old father in the faith.” Now, for all of you who knew him, you will realize that Dr. Kennedy was not what one calls a “hugger.” So I was rather surprised when that moment happened. It never happened before. A handshake was enough. If it was an emotional moment, perhaps he would put the other hand on my shoulder or the back of my neck (usually in a time of prayer before we left to go leading worship). But this would be the last time. I suspected it and I guess he did as well. The Spirit called for us to move beyond the handshake and embrace as father and spiritual son. That embrace is with me even to this day.

There is a wonderful song by the late singer/songwriter, Dan Fogelberg, where he wrote about his father, a band leader in a high school in Peoria, Illinois. The song is one that many of us know very well and even now the tune is in my head. The song is called, “The Leader of the Band.” Dan Fogelberg would later say that it was the most important song he had ever written. It was about his identity of “just” being “the living legacy of the leader of the band.” When I think of Dr. Dennis James Kennedy, and I think of the legacy of the man in my life and ministry, and, of course, in the ministries of so many others around the world, I realize that I am just the living legacy of the ministry of a man – a man who followed the Man, the “God-Man,” Christ Jesus.