It is so good to hear from you. Thanks for writing.

Ah, yes, the eleventh grade obligatory Scarlet Letter! Good for your daughter! She has some good reading ahead of her. Yet, I am afraid that Mr. Hawthorn has bequeathed a sad and permanent stain upon the American impression of the Puritans that is more deeply tainted than Hester’s unkind mark.

There are a lot of issues to address in The Scarlet Letter beyond the characters in the book itself.

There is the writing itself. It is splendid prose and is rightfully part of the American Great Books corpus in my opinion (and, more importantly, in the opinion of the greater literary minds such as Mortimer Adler). Yet, we must read critically. Was Hawthorn writing out of a motivation to redress social ills and religious constraints of seventeenth century New England Calvinism? Or something else? What is the relationship of Hester’s demise and the publication in the 1830s of John Winthrop’s popular sermon from 1630, A Model of Christian Charity (the “City on a Hill” sermon about American exceptionalism)? What is the relationship of the received New England Puritan religion and the new transcendentalism sweeping New England at the time and washing away older Calvinism with it? Changes were afoot in Hawthorns day. Is this classic about Seventeenth Century New England (Hester’s time) or Eighteenth Century New England (Hawthorne’s time)?

There are some answers to be pursued, but it would be good if a teacher could ask these questions (or better ones) and allow students to engage resources, think critically, reflect openly, and arrive at some (teacher-guided) conclusions. Of course, the goal is not just a pedagogical journey to conclusions, but a process that supports self-discovery of the truth.

I do believe that there is evidence that Hawthorne was on a mission to retaliate against the town, Salem, that had hurt him, personally—he was sacked from the Custom-House there in 1849. He had been a surveyor. In fact, when Ricknor, Reed, and Fields published the novel in 1850 they only issued 2,500 copies.[1] It also presented a very nice and tidy setting for his novel about basic human issues of sin, fallenness, and redemption. Hawthorne had something to say about that. Speaking of redemption: it might be reckoned that Hawthorne, with a “w,” was seeking to reverse the reputation of his third great grandfather, Hathorn, with no “w” and no “e” who was a condemning judge at the notorious Salem Witch Trials.[2] Then, there is the matter of Hawthorne’s faith, or lack of faith. The famous author was no Christian, but Hawthorne was a member of the Transcendental Club. This rather trendy group of writers and artists, Henry David Thoreau and Walt Whitman among them, sought to not only study the increasingly popular Unitarian ideas coming out of Boston, but to propagate them in their art. Of course advancing a cause is certainly aided by the dismantling of older ideas of purity and heroism. Our Puritan forefathers’ English brand of Protestantism had to go. I believe that many school-teachers, like this one, get close to the true picture when they say,

Hawthorne’s The Scarlet Letter is a wonderful text to couple with the teaching of Transcendentalism. The protagonist, Hester Prynne, displays many acts of civil disobedience throughout the course of the novel, and Hawthorne often criticizes the Puritan society that punishes her so harshly. The lessons students take away from this novel relate very closely to the ideas espoused by the great transcendental thinkers—civil disobedience, self-reliance, and nature as a reflection of God.[3]

I think this enterprising school teacher got close, although she might have had some ideas of her own to propagate. I would have preferred that she had extricated other lessons to be taught, or, at least, brought out some other possible options, but I rather think that Hawthorne might have approved (at the time of his writing, anyway). Nevertheless, the enterprising teacher is certainly tapping into the historical angle behind the novel. My concern is that our forefathers’ heritage suffers at the political-philosophical postulations and personal angst of the author and those who agree with him (or, worse, those who teach out of ignorance or lack of interest).

Why care? Because it is in our best interests to care. Those who do not care to reclaim the honor of their ancestors are unworthy to be remembered aright by their descendants.

So does Hawthorne’s depiction in The Scarlet Letter serve Hawthorne’s purposes or does it accurately depict the Puritan society as a whole? Harvard historian, Professor Dr. Perry Miller (1905-1963) would spend a career correcting the misconceptions made by the likes of Hawthorne. Miller emerged in the twentieth century as the premier scholar of American Puritanism. Dr. Perry Miller was an atheist. His work was one of history, not theology, which, in our case, lends even greater support to our statement that the Puritans were not dour, hard-hearted, humorless religious zealots, but were noble, magnanimous, caring, and gracious people on the whole who were quite artistic and poetic in their own way. It took George Marsden of Notre Dame to draw attention to the fact that is was actually the love of Jesus that drove the Puritans, first and foremost.[4] It is interesting to note that Miller, in his brilliant The New England Mind saw the author of The Scarlet Letter as exercising remnants of a piety that he at once denounced:

“Piety was the inspiration for Puritan heroism …  It  inspired Puritan idealism and encouraged Puritan snobbery. It blazed most clearly and most fiercely in the person of Jonathan Edwards, but Emerson was illuminated, though from afar, by its rays, and it smoldered in the recesses of Hawthorne’s intuition.” (Miller, The England Mind, 5)

Thus, Dr. Miller surmised, ” Nathaniel Hawthorne, for all his skepticism could not escape the problem” of being controlled in some sense by “the heritage of Puritanism.” (Miller, 162-3)

So I quite agree with your concerns about stereotyping the Puritans. There is a bit more here than meets the black stove pipe hat and witch trials. The Puritan religious and philosophical-ethical strain in our nation is undeniable (even to an English historian like Paul Johnson). Anyone who fights against it is fighting against the spiritual and historical DNA of a nation, going all the way back to that historic “City on a Hill” sermon that changed the world (one thinks of Ronald Reagan[5] and, interestingly enough, John F. Kennedy,[6] both of whom used Winthrop’s famous sermon to reframe their twentieth-century America using the seventeenth-century fabric of Puritan vision). To—what eventually became— the Puritan caricature itself: Were there ever such hard, mean, narrow-minded, hypocritical American (and English and Dutch) Puritans? Well, of course. There are always such people, aren’t there? Was such behavior characteristic of an entire society, or, more precisely, were dour religionists somehow the natural consequence of the Calvinism that shaped their culture? The evidence doesn’t bear that out. Perry Miller of Harvard is only one scholar of many others, now, but one very important scholar who spent a career revising the popular notions of Hawthorne’s superb literature, but quite parochial setting for our spiritual and national forefathers and mothers. In many ways it might be said that Hawthorne’s script was even more than his Transcendentalism (he eventually grew negative on that philosophy). In the end, as Brenda Wineapple’s fascinating biography[7] portrays him, the author of The Scarlet Letter became a disquieted, complicated figure that was hard to pigeonhole by the Boston elites who tried desperately to do so. Perhaps, even larger than the the issues that Hawthorne faced, personally—his great-great-great grandfather as judge of the Salem Witch Trials, a possible need to reconcile his own New England Puritan stock with his cosmopolitan views of the 1850s, his sacking at Salem Custom-House, and the hard feelings that he harbored, as well as his passing interest in a faddish new quasi-religion that quite possibly needed the fuel of a convenient villain, i.e., the Puritans—it might have been the larger, continuing struggle between Cavilers and Round-heads—i.e., the English Civil War—which carried over into the New World. The disagreements of that struggle and the resulting social contract may have carried into the American Civil War in the decade past The Scarlet Letter’s publication.[8]

Well, these are a few of my thoughts on the matter of the Puritans in The Scarlet Letter. I await hearing your own.

Oh, by the way: I wonder if your daughter—armed with these first thoughts on Hawthorne and his famous novel would think that Hawthorne— if we were to superimpose the author onto his characters—is (a) the unnamed Narrator of the story who works at the Customs-House; or (b) one of the other characters in the story—The Reverend Arthur Dimmesdale: reflective, deep, brooding, earnest, but inadequate in the most predictable of human ways, failing himself and others; or even Roger Chillingworth: Hester’s unloving, conniving husband who disguised himself as a physician: degrading, tormenting himself and others on his fanatical pursuit of vengeance—? I wonder.

The Lord bless you in your parenting and in the boundless joys of reading good books. 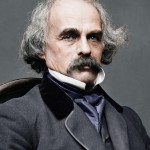