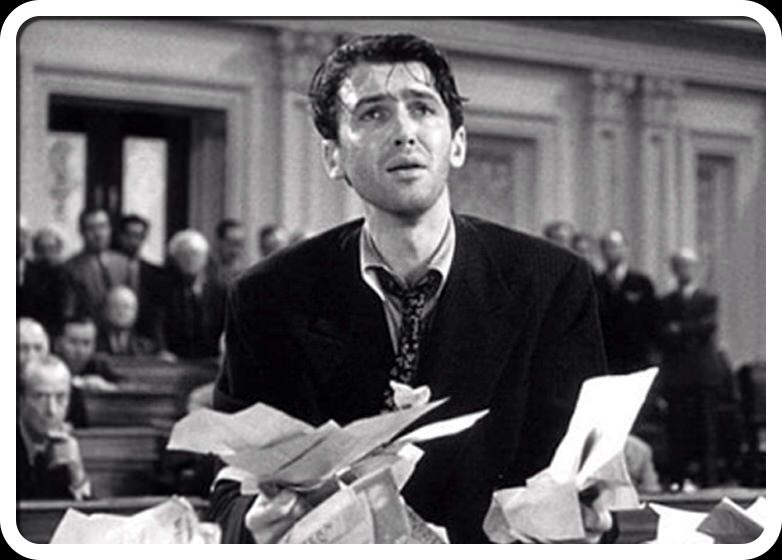 Oh if only there were a Jimmy Stewart, a “Mr. Smith Goes to Washington” congressman who would interrupt the “Fiscal Cliff” negotiations and cry out with the passion of an unadulterated patriotism. The cynics called it political naïveté; but the Washington power-brokers could not kill the dreams of a young Senator. He could not be bought.

What would happen if a Mr. Smith came to Washington today?

[Enter the Senate; read the following words as if you were in the balcony; read the words of a Mr. Smith if he came back, read with your mind’s eye seeing a young Jimmy Stewart, and your mind’s ear listening to his Western Pennsylvania, down-home accent and stuttering passion articulating the power of nobility robed in simplicity]

“Mr. President I, I, …I want to speak. No, I, …well, I,…I have to speak! I’m not much of one either. But I got one question, one question: have we forgotten how we got here? I mean have we forgotten that these blessings we have enjoyed come from, well, from God? Yes from God. God gave them to us. Well, Sir, I move we ‘stand down’ for prayer; maybe, just read from the Psalm appointed for this Sunday after Christmas: [flips through Bible nervously, points at the passage with his index finger of one hand as he holds the floppy, black, old Bible with the other]; just hold on, wait a minute, I’ll find it…here it is:

‘Some trust in chariots and some in horses,
but we trust in the name of the Lord our God.’—Psalm 20:7.’

Did you hear that? Now where is our trust? I think we give the answer on our money and now we need that trust more than ever, FOR our money. Now if we pause to pray and humble ourselves before God, throw ourselves face-down on these hallowed floors, I’m sure the Lord is bound to hear us. ‘Lord knows that would be a sight to see! But it’s time to see it! Okay—I hear your snickering. Go ‘head. Well, I’m not as naive as some of you back-room-deal-cutting-art-of-compromise-lifelong politicians think I am. I know your games! Well, this is not a game, ladies and gentlemen. No Sir-ee! This is our country. Good, honest folks have sent us here to do the business of the People. And we’ve come to this—what do they call it?—a ‘Fiscal Cliff?’ Well America has been to the precipice of such cliffs before! This is not the first time we’ve been pinned against the wall. Remember Jamestown? Remember Valley Forge? Remember the dark days when brother fought against brother and we saw no way out? Remember Pearl Harbor? Remember when the world cowered under a Soviet evil that we were told was inevitable? Well Ronald Reagan didn’t buy it. They laughed at him and his view of America. Maybe you’re laughing at me. I just happen to believe that there is a way through this for the good. In fact, I think it is defining! This is about whether we will seek wisdom from outside these halls and seek the throne of …God. Yes, there I said it again! Yes, God! Remember Him? Do you think that maybe our Pilgrim forefathers turned to Him? Or Rangers on D-Day? Do you think Mr. Lincoln prayed over the anguish of sending boys to fight other American boys? They were all living on the cliffs of their day! And they all acknowledged that they didn’t have all the answers. But they had one Answer. And look at what He gave us, and will give again, when we just admit that we have come to the end of our rope. Folks, all we have to do is cry out, ‘Lord, we’ve left you out of this. And we sure have messed things up. But would you have mercy on us Lord? Now more than ever, we need you.’

So, how ’bout it fellas? I’m not leaving this floor until we recess and pray. I call upon the President to do the same… I ain’t leaving here ’till we pray! I just ain’t leaving!”

[Mr. Smith collapses. Blogs send the news around the world in seconds. A YouTube video of Mr. Smith goes viral. Pressure mounts. Congress and the President set aside a day of prayer. A breakthrough comes. A budget is passed. The fiscal cliff becomes a mountaintop of prayer. Other agencies, desperate to deal with the challenges in diplomacy, military, and education, each call for days of prayer. Families are inspired by such leadership. A nation bows on a day ordered by the President to be a day of fasting and prayer. Churches are filled. Revival breaks out—the likes of which have not been seen since the First Great Awakening]

This is a dream, you say. Okay. I admit it. it is. Yet that is how our nation came to be. In the darkest hour, a light breaks through. Winthrops’s shining city on a hill. Reagan’s “City on a Hill.”

Okay. Now, who will play the part of Mr. Smith?