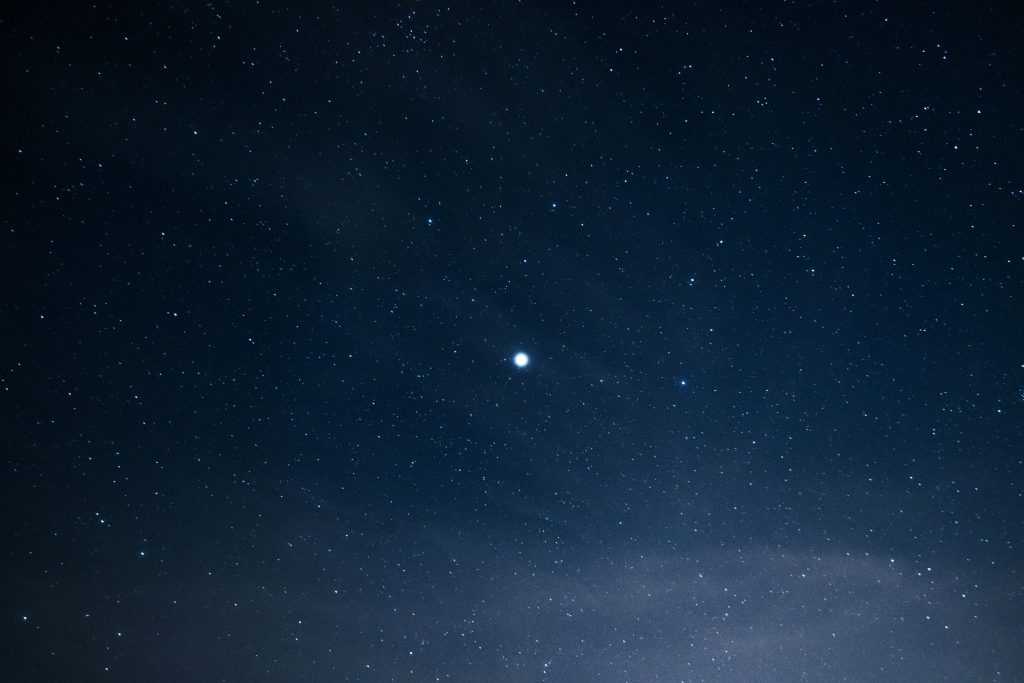 C.S. Lewis said that science has the notes to the poem. But in the Bible, we have the poem itself.

And the miracle of miracles for C.S. Lewis began with the Incarnation: God became Man. Yet, we can sometimes get hung up on the notes to the poem, particularly with the scientific details of the parts of the story that remain mysterious to us. Take the Star of Bethlehem, for instance. Was it a comet? Was it a supernova? I have studied all the theories through the years of my preaching Christmas Eve sermons. The wisest conclusion I have ever read came from one laboratory which, after investigating, concluded, “we just don’t know.”

So, the scientific notes are missing. But the poem is here. A star rising from the east appeared and led Gentile wise men, astrologers, scientists of their day, who were also quite wealthy, to follow the Star. The Star could move. It settled over the place where Jesus lay. The Star seemed to move more like a UFO than a predictable meteor or exploding supernova or new planet in the sky. It moved with purpose, intent, and acted, as if with personality. It is a mystery. Not a myth, not a fairy tale, but an event in history that defies scientific explanation.

The wonder of Christmas is that the Star defies all explanation, yet invites all investigation. The heaven-conceived doctrine that brings wonder to life is the Incarnation story of Christmas: God come down to Man to be born in the flesh of a woman who He made, to condescend to those he created, to be subject to the natural forces of creation that He spoke into being. This is Incarnation. We spend far too much time reading the notes and not listening to the music, following the poetry of the story. In fact, to miss the beauty of this miraculous time is to miss the wonder of Christmas. It is to slip into the despondency of the season. But let the Advent candles burn for hope and love, place the angel on your tree with faith that an angel, indeed, entered time and space to announce God’s promises come true, that an angel will announce the Second Advent; and open presents on Christmas morning with an excitement that transcends merchandising and points to the unwrapping of the gift of a new heaven and a new earth and . . . well, you have a real Christmas. It’s not that far out of reach.

The Star in Christmas is a miracle to help you get there. That star was and remains a divine sign of Almighty God to lead you to experience the wonder of Christmas.

How so? Looking at the text, I would direct your attention to, at least, two features of God’s divine signs.

The Star had been prophesied. Whether the Wise Men knew of those prophecies, which is, of course a possibility, or whether they were given a divine dispensation of grace, to awaken them to the reality of the one true God and His Son Jesus Christ is not known. We only know that the divine sign, in this case the Star, fulfilled God’s multi-faceted purposes.

Sometimes divine signs come to us in different ways. When I was in India I heard many times of dreams that have been given to Muslims in faraway mountainous regions of India. In the dreams the Islamic people see some sign of God that awakens them to follow Him to His Word, or to a believer, to hear the Gospel. I am sure that some of these are counterfeits. I am also certain that some are not. I am more convinced than ever that we must reach such people with the “word made more sure:” the Word of God. I am only saying that God’s ways are higher than our ways. He will not go against His Word. And yet His love and His grace are greater than we could ever imagine. I dare not enter the courts of divine providence to inquire of His electing mercies. Yet, I recognize that God has sent divine signs through redemptive history, culminating in the greatest sign, the resurrection of Jesus our Lord from the dead. That sign is now inscripturated into the Word of God and through the power of the Holy Spirit we can know that when we speak that Word God will take that message and bring people to repentance and faith in Him.

So, God used divine signs to fulfill His promises in Scripture, bringing about Scripture. The ordinary sign and way in which He reveals Himself today is through the Word and His Spirit. Yet, we do not dismiss the extraordinary work of God that may lead others to hear that Word, just as He leads us through people, places, and events to come to hear that Word. My question for some of you is this: Perhaps, God has sent the Star to you today. Perhaps, it is a family member or a friend who told you of God and His Son Jesus Christ. Perhaps, you are hearing that message now. Divine signs come in all shapes and sizes and elements, from heavenly luminaries to very earthly human beings. But all divine signs say: The Father is speaking to you. Listen. Follow.

Another feature of divine signs is to be noted here. So:

We note in the text that the Star came to rest over the place where Jesus was (9). Divine signs, be they the Star of Bethlehem or a healing or any other sign in the Bible, always, somehow, leads the favored one to see God’s salvation in His Messiah, the Lord Jesus Christ. Today, when we point others to His Word, that Word and the Holy Spirit Himself lead the lost to see the Lord Jesus. All other signs are counterfeit. Jesus is the focus and finality of all divine signs.

When I was a boy of about four years of age I had severe asthma. We lived far out in the country with no automobile. There was no such thing as going to an emergency room. There was no emergency room, no hospital, and no way to get there if there was one. I came down with an asthma attack. My Aunt Eva, who reared me, tried every home remedy she knew. But there was one emergency room she knew of: the little rough-hewn chapel called “the Tabernacle” was just down the gravel road from our one-hundred-year-old home. She picked me up and packed me up the gravel road to the Tabernacle, praying the entire time that “Brother Devall” would be there. He was a plumber-by-day and preacher-by-night. He should not have been there. He should have been working. But he wasn’t. He met us at the front door. He tried to help me as much as he could. “Lay hands on him, Brother Devall, and the Lord will heal him!” My Aunt Eva screamed. My Aunt Eva was a Methodist Episcopal. Brother Devall, Elisha-like, lay his hands on me and began to plead with God for my life and for my healing. After a short while, whether comforted by the calm voice of Brother Devall or the serenity and quietness of that chapel, I calmed. I also had no more asthma. An army doctor recently diagnosed me with a mild asthma that had crept back on me. I told the doctor my story. I said I welcomed the asthma’s return and wasn’t fearful of it. For God had kept it at bay for most of my life. It had led me to the chapel. In a real way, it led me to Christ, to the Church, to preaching the Gospel, and to lifting up His Word and His Sacraments to say: “Jesus Christ is Lord. He heals our diseases. Sometimes those are here. In His secret counsels our Father knows what is best. But He heals our souls unto eternal life through His Son Jesus Christ.”

The sign you have tonight before you are Christmas Eve itself, the Word of God sung, read, prayed, preached, and the Sacrament of Holy Communion—His body given for you, His blood shed for the forgiveness of your sins—and they point but to One: our God and Savior the Lord Jesus Christ. My beloved: His Star settles over this place tonight. Worship Him.

Recently, I told you the story of a mission I conducted in Northern Albania as the “Iron Curtain” of the former Communist country crumbled beneath the sledgehammers and fingernails of its captors: young college students, aging pensioners, business people, and even former Communists. I was in the North of the country, in the stunningly beautiful Albanian Alps. I had been sharing the Gospel with the police chief and other city fathers at a hotel in the village of Kukës. That evening I gathered the English members of our mission together for a Communion service in an upper room that had been set apart for that service. One of the Muslim men who had heard the testimony came to me and asked to participate. I examined him and learned that he had not yet received the Lord. I explained that the service was instituted by Jesus Himself for those who had been baptized into His family by faith to remember Him, to look forward to His return, and to increase our love for one another. “We do that,” I went on, “by feeding on Him by faith. We believe that He is present in a spiritual, but very real way, and that we are one with the Church here on earth and in heaven.” He shook his head in a sad agreement. “But, can I observe?” “Why, of course you can! I want you to. Please come.”

I led the service at a large round table that had been set up by the hotel staff in one of the empty guest rooms. He sat with us. We used the Book of Common Prayer as most of our team were Anglicans. One of our team had written an order for us. I led them through confession, prayers, the Great Thanksgiving and Consecration of elements. As I held the bread and said, “This is His body given for you,” I noticed his intense stare at the element. As I said, “This is His Blood, shed for the remission of the sins of many.” His head slowly bowed.

After the service, this Muslim man came to me with a yet-bowed head. He raised his head like a sun rising. He spoke so deliberately. “Tash, unë kuptoj,” translated, “Now, I understand.”

The bread and the cup became the signs that Christ had intended. The Muslim man saw the truth of the Gospel of Jesus Christ, a truth that I had taught but had no power to impress or convert. But, in his case, the powerful vision of the Sacrament of the Lord’s Supper communicated Christ and converted his soul. He had the notes. He needed the poetry. He had the doctrine. He needed the wonder.

And that is what the Star of Bethlehem is all about. It is about the wonder of our Father leading us all to find our salvation in the most unlikely places. It is about the divine sign of Word, Sacrament, and Prayer converting our souls, healing our hearts, and leading us home.

The sign in among you. In the power of the Holy Spirit, He is in you, guiding you to the place where Jesus is. Follow Him there and receive the wonder of wonders: the assurance of eternal life and light of His Word that brings joy and purpose in this life.

In the name of the Father, the Son, and the Holy Spirit. Amen.