The legacy of the American Civil War was, among other things, to form a new and more perfect Union. This was accomplished with unimaginable human carnage, but also with nobility and sacred honor, and, at last, with Constitutional amendments to right long-standing wrongs. A few museums (and not a few shoeboxes in family-home-attics) still display the faded photographs of Union and Confederate monuments being dedicated in the early years of the Twentieth Century. Often, the yellowed pictures present the happy presence of hunched over, but smiling old men with grey stubble, marked by some pin or emblem on their baggy jackets—some from Vermont and Alabama, others from New York and North Carolina—posing together for a sign of a newborn national unity and, yes, the painful memory of harder days. Black and white, North and South, urban and rural: these are the diverse Americans who began the long and arduous work of making our Founders’ dreams, —holy dreams inscribed in our national vision statement, the U.S. Constitution—a blessed reality. And they frequently did so with their monuments to Lee and to Grant in the background. What so many of those vintage photographs also reveal—at Gettysburg, Vicksburg, and Lookout Mountain—are white-haired veterans of both sides gathered under one flag: the Stars and Stripes. The senescent warriors, in tattered butternut and fading blue—all just black and white to us—were memorializing the distant foggy battles of their youth, when the Founders’ vision was tested and when the vision held, when the vision found greater understanding amidst decades of confessional crises and cultural complexities. There were united states—plural—prior to the Civil War. There was the singular United States afterward. As President Lincoln urged in his final days on this earth, the best of our forefathers–Union and Confederate, black and white, rich and poor, Republican and Democrat—sought healing by mutually honoring the other.

The complex dynamics that led to the American Civil War cannot and must never diminish the greater issue of an evil institution already banished by the Mother Country. Sadly, the battles of William Wilberforce for the abolishment of slavery that took place on the floor of Parliament before a Speaker of the House of Commons had to be accomplished out on the battlefields of American farmland under the command of former West Point classmates. Let us recall that there were many who fought not for a Confederacy of states, still a novel idea to them, but for their own state. Their state was their nation in those days. Yet, the South and the inevitable loss, and through the price of many trials in Reconstruction and many tears over her losses, poverty, devastation, and hardship, demonstrated in precious blood that Lincoln’s vision of a new nation was not only right but inevitable. The American South had a long way to go by 1878. And, yes, even by 1968. But her embrace of the reformed and reforming America led to one of the most patriotic regions of the nation. The sons and grandsons and great grandsons of those old white-headed Southern veterans have served the United States in her Armed Forces ever since, often with a rare distinction inspired by those greater Southern military leaders gone before. I am one of those great-grandsons of a Confederate soldier. Joseph Austin Milton was a soldier in the 9th Louisiana Regiment, Company G. He left the small village of his father had founded, Milton Old Field, to fight for Stonewall in the Shenandoah. He was with General Early’s Division, under Lt. Col. Leroy Stafford. My Great-Grandfather was of North Carolina stock,  son of a War of 1812 veteran, my namesake, Michael Milton. Michael was the grandson of Isham Milton, a North Carolina veteran of the Revolutionary War (in the 1st Virginia Regiment). His brother, James Milton, a member of Woodford’s Brigade, died in the late spring of 1778 at Valley Forge. My father was C.S.A. Private Joseph Milton’s grandson. Jesse Ellis Milton fought as a Coast Guard and Merchant Marine officer in World War Two. I was only five when my father died but he lived long enough to teach me that racism is a heinous sin in the sight of God. There was never ambiguity over the issue in my home. I rode a bus into school during desegregation with the Clan forming a human chain to block our entrance on that first day. My neighbor, a hog farmer and our school-bus driver, steered with one hand and held (what looked like) a Colt Python .357 Magnum caliber revolver in the other. I was face down on the floor of the bus with the other child as our Livingston Parish school bus broke through the KKK protesters’ position. Mercifully, no one took on that pistol-toting hog-farmer that day. My heart broke for my new fellow students who were obviously confused and afraid. The valor of those African-descended students should not have had to be proven as children.

Well, that is too much family lore and I commend you for your patience if you are still reading. But here is the point: My American family story is not unlike so many others. My wife’s great-grandfather from Indiana was a drummer-boy in Union blue. So, the progeny of two former “enemies,” now, live as man and wife. Such a living metaphor of unity is not uncommon in this splendid country. This is the norm for post-Civil War America. This is how statues could be erected. Our stories, mistakes, hardships, and even our sins, and the gracious redemption born of love, make up a larger story, an American story.

But what do we do with the monumental challenge before us today in our continuing struggle for a better nation? A struggle that must go on despite the human sinful nature that will continue to breed disrespect for fellow men based on pigment in the skin or an ugly pride that can only survive off of the diminishing of another?

Do we engender unity through destruction of our public art? “Do not move an ancient landmark or enter the fields of the fatherless” (Proverbs 23:10 ESV). There are principles in that verse that offer wisdom to all sides. Remember the orphan of the African-American infantryman who fought in blue. Remember the orphan of the poor white Southerner who fought in gray. Remember the crimson stain of war that created what Harvard president Catharine Drew Gilpin Faust called, “This Republic of Suffering.” 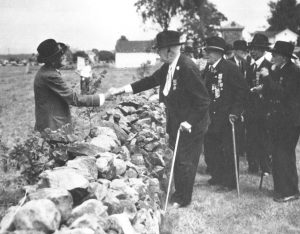 On July 1-4, 1913, fifty years after America’s bloodiest battle, over 44,000 Union veterans and over 8,000 Confederate vets gathered, this time in peace, at the stone wall on Cemetery Ridge where the deathly clash of Pickett’s Charge took place. Yet, this time, it was said that the old Union soldiers could not contain themselves as they saw their Confederate counterparts advancing. The venerable veterans of the 8th Ohio and 126th New York regiments crossed the stone fence and ran, if an old man can run, to embrace the aging infantrymen from the defeated 1st and 3rd Virginia and the North Carolina Battery. There, in tears and brotherly love, fifty years after the fateful battle, on the eve of America’s 137th anniversary of Independence Day, Abraham Lincoln’s vision became flesh and blood: “with malice toward none and charity toward all.”

It is time to heal again. It will take respect, love, and decency. It will take arguing for the rights of others over “my rights.” And it will require honoring others higher than ourselves.

But let us not disturb the memorial stones of that generation that fought the Civil War and, then, gathered to memorialize the standard for a new American unity. Let us remember and let us gather to tell stories, to tell our stories, and to listen to others’ stories, with hushed reverence for the dignity of all of God’s children. Perhaps, beneath the shade of statues dedicated to peace by the old veterans and fatherless children we, too, might find peace.

Do not tear down. Build. Erect more statues that tell the continuing story of this Republic. And allow those sacred stones to teach generations to come that the history of our nation has a river running through it: a strong and ever-widening river of ideals that must become civic norms. In this way, through stories freely shared, and through our common values in the blood-bought and blood-preserved Constitution, we can calm the heated conflicts that are inevitable when recovering sinners live together. In this way the history of our public monuments can remind us of the magnanimous gestures of many of those who were right and the oft-noble lives of penitent sacrifice by many who were not, and the beauty of peace that is rooted in “one nation under God.”

Let us be regal in response rather than rash in reaction. Let us love one another as God has loved us. Then, we will erect a monument of human spirit that will endure long after the most beautiful stones have crumbled, crumbled under the weight of unyielding time, rather than unwise reaction. We may even realize Lincoln’s legacy that “a new birth of freedom” will ensure that a “government of the people, by the people, for the people, shall not perish from the earth.”

Appendix: From the Wall Street Journal

“That [‘All men are created equal] is a long and difficult history of progress, one that deserves to be known in its complexity, rather than not known or forgotten. Robert E. Lee spent the rest of his life after the Civil War, notably as president of what became Washington and Lee University, trying to heal the wounds between the north and south. That’s at least one legacy of Lee we can all celebrate . . .” — Opinion page, Wall Street Journal, Friday, August 18, 2017.

Respecting your August 1 inquiry calling attention to my often expressed admiration for General Robert E. Lee, I would say, first, that we need to understand that at the time of the War between the States the issue of secession had remained unresolved for more than 70 years. Men of probity, character, public standing and unquestioned loyalty, both North and South, had disagreed over this issue as a matter of principle from the day our Constitution was adopted.

General Robert E. Lee was, in my estimation, one of the supremely gifted men produced by our Nation. He believed unswervingly in the Constitutional validity of his cause which until 1865 was still an arguable question in America; he was a poised and inspiring leader, true to the high trust reposed in him by millions of his fellow citizens; he was thoughtful yet demanding of his officers and men, forbearing with captured enemies but ingenious, unrelenting and personally courageous in battle, and never disheartened by a reverse or obstacle. Through all his many trials, he remained selfless almost to a fault and unfailing in his faith in God. Taken altogether, he was noble as a leader and as a man, and unsullied as I read the pages of our history.

From deep conviction, I simply say this: a nation of men of Lee’s calibre would be unconquerable in spirit and soul. Indeed, to the degree that present-day American youth will strive to emulate his rare qualities, including his devotion to this land as revealed in his painstaking efforts to help heal the Nation’s wounds once the bitter struggle was over, we, in our own time of danger in a divided world, will be strengthened and our love of freedom sustained.

Such are the reasons that I proudly display the picture of this great American on my office wall. 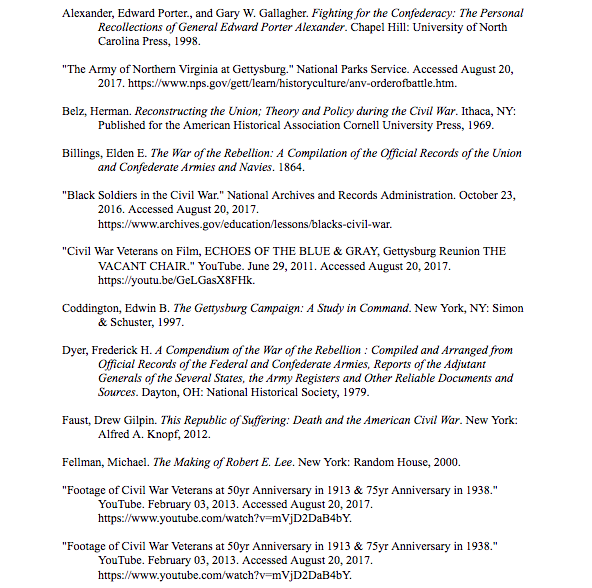 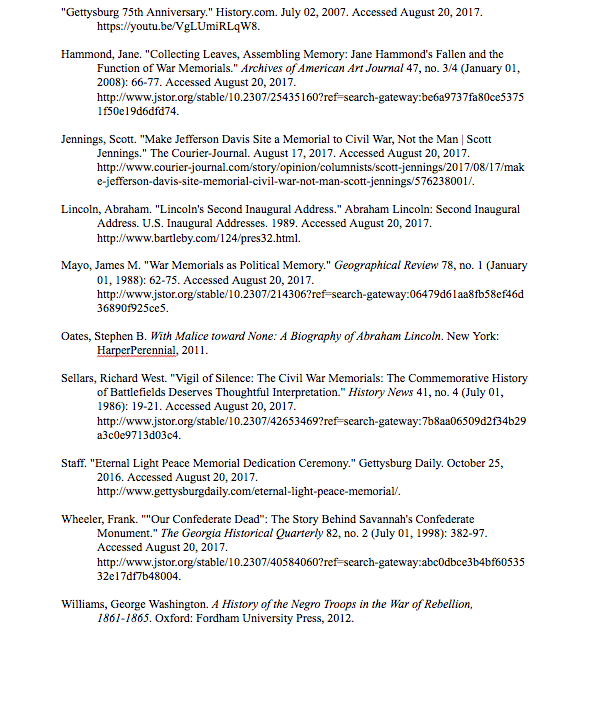 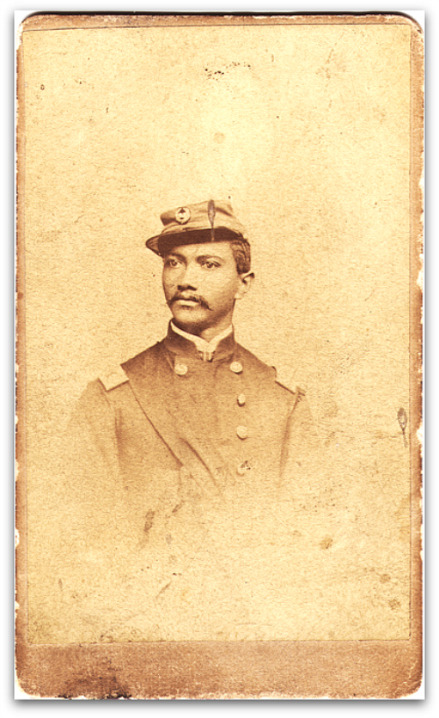 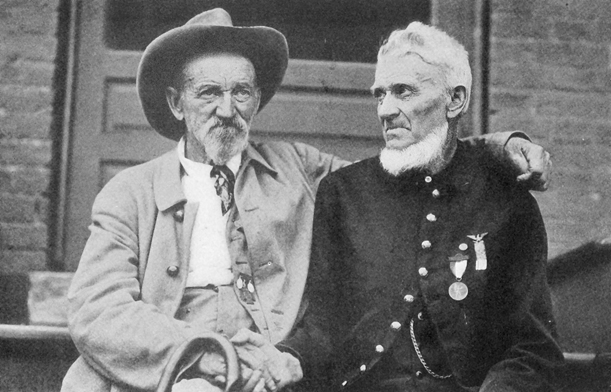 “And he shall judge among the nations, and shall rebuke many people: and they shall beat their swords into plowshares, and their spears into pruninghooks: nation shall not lift up sword against nation, neither shall they learn war any more” (Isaiah 2:4).