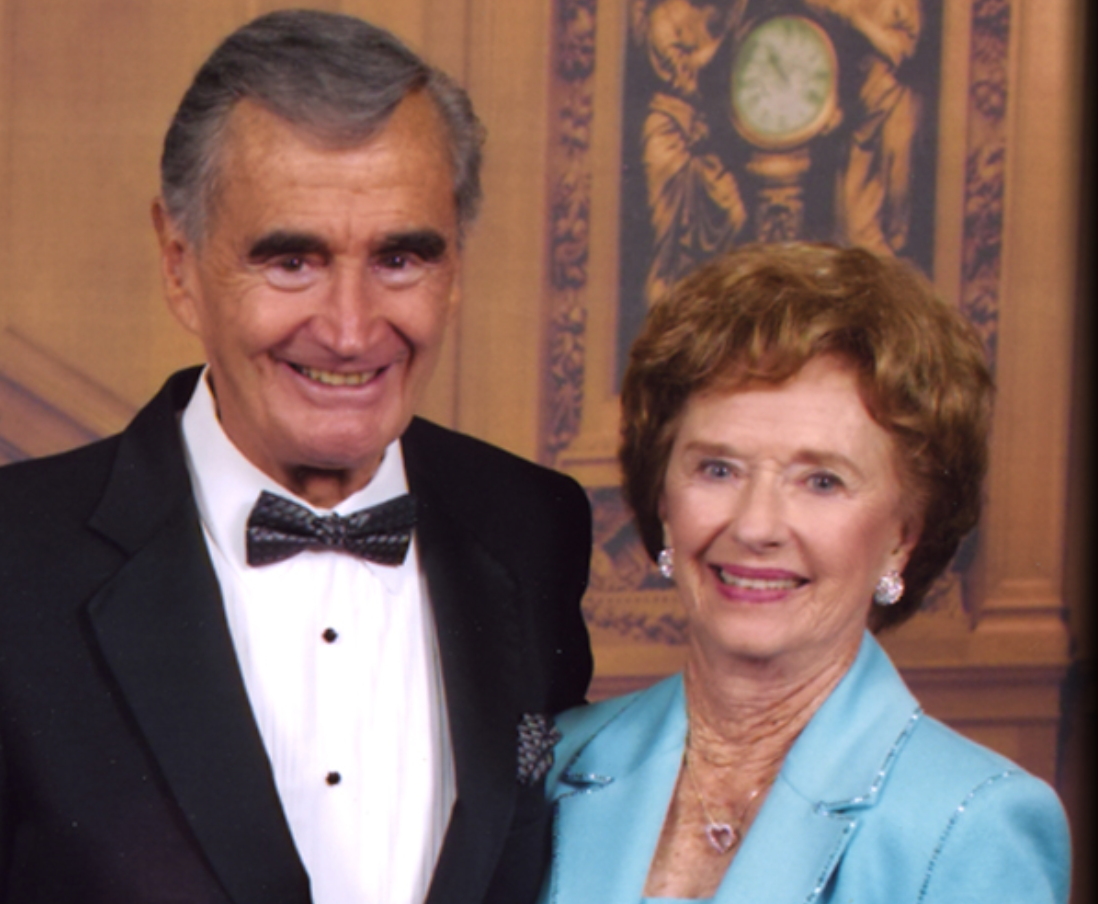 [pullquote]I see Dr. Kennedy taking the turn from the centered Communion Table towards the elevated pulpit, passing in front of the choir. Then, I see it: the unmistakable glance.[/pullquote]

Mrs. Anne Lewis Kennedy, the widow of Dr. D. James Kennedy, passed from this life, serenely, triumphantly, into the presence of the Savior she professed in this life, and whose gracious invitation to eternal life she shared with others, for so long and so well. When I learned of Mrs. Kennedy’s passing from Reverend James Carter, who had been a faithful pastor to her in most of those years of widowhood, an image formed instantly in my mind of a typical Sunday morning; Dr. Kennedy replete in his sapphire academic gown and flowing doctoral hood, processing with measured steps, the sanctuary of clergy, choir and worshippers all standing, all singing, “Jesus Shall Reign.” I see Dr. Kennedy taking the turn from the centered Communion Table towards the elevated pulpit, passing in front of the choir. Then, I see it: the unmistakable glance. I saw it as I, too, a pastoral intern, would process, having taken my place just thirty-seconds prior, at the lectern, on the other side of the chancel. Dr. Kennedy would look to Mrs. Kennedy just before he ascended the pulpit. She was singing, of course. But, I learned that a woman could continue to carry out her calling even as she sang—and music, too, was her calling. For Anne would smile at her husband, throw a soulful coup d’oeil, something very close to a wink, and then, nonchalantly return her eyes to the Director of Music. Only then, do I see Dr. Kennedy rising above the sacred assembly, lifted spiritually and even physically through a modulated last stanza of Watt’s versification of Psalm 72,

“Let every creature rise and bring the highest honors to our King, angels descend with songs again, and earth repeat the loud amen.”

Now, the great pastor’s robed arms are extended in priest-like appeal to heaven, his eyes are solemnly closed, and his spirit is undoubtedly animated. There may be a half-second silence between the eternal finality of Diane Bish’s last reverberating note on the Ruffatti organ and the first chord struck by the well-known minister’s deep, soothing baritone voice: “Almighty God: Father, Son, and Holy Spirit . . .”

The totality of that vision, with each critical singularity—the opening movement of the Morning Worship service at Coral Ridge Presbyterian Church—came to me, I think, because there was a remarkable spiritual stream—a current, if you prefer—running beneath and between herself and the celebrated senior minister, evangelist, theologian, broadcaster, and best-selling author. It was a transcendent tributary that originated in the heart of a sweet Southern Belle from North Carolina (who grew up in Lakeland, Florida), and who never lost her soft Southern drawl, nor the indomitable spirit of so many Southern women like Anne: granddaughters and great-granddaughters of Reconstruction that shaped a beauty on the outside and the celebrated “Steel Magnolia” on the inside. Her story of meeting, falling in love with, and marrying the young, dashing Jim Kennedy, the rising star of Author Murray Dance Studios has been recounted by many. Others know that in a day when most seminarians were bachelors, and younger, Jim and Anne Kennedy stood out at Columbia Theological Seminary on both counts: married and a bit older. But, I think the Anne Kennedy story—regarding her public life—began there: the story of how that spiritual stream was formed, the God-given binding of marital influence and feminine insight that gave Jim Kennedy his confidence, his joy, his identity, and his courage to go forward in the Gospel ministry. I do not mean to diminish the supernatural line of divine strength that James Kennedy enjoyed from His Savior, Jesus Christ (for I have seen the fire burning in the man, a fire for souls to be saved and lives to be transformed. I saw that fire burning when there were no cameras anywhere in sight to record the event). I mean to say that there was something else the Lord gave Dr. Kennedy that the man needed. Jim needed Anne. So, the Holy Spirit was at work in Anne Kennedy and through her she shaped the life of her husband (their daughter, and so many others).

Every man faces his demons. Most of the time the demons are veiled behind faces we once knew, even the faded faces in repressed memories of people from that community called family. It is not telling tales on the dead to recount that my mentor, Dennis James Kennedy, was a deeply private man who had borne more than his share of those metaphorical demons (and because of his open stand for Christ, later, he endured real demonic attack). The legion that Jim endured, by his private admission, were more painful than most. When God calls a man into the ministry, the minister, like Moses and St. Paul before him, must make sense of his message and the man: the man he is, the man he wants to be, the man he is expected to be, and, always, the man he was. There is always a gap at that very point: a dead Egyptian in the sand, some older Christian mother in the church whose son was one of the young men of “the Way” that you authorized to be “tried” and executed. How does a preacher deal with that gap? That inconsistency? It is in that very gap—the preacher’s gap—where human frailty and diabolical lies conspire to brew doubts, fears, and disorders that are both known and unknown to the pastor. Surely, the healing for the preachers gap is the grace of God through the same Jesus Christ the preacher proclaims to others. Thus, St. Paul:

“For I am the least of the apostles, and not fit to be called an apostle, because I persecuted the church of God. But by the grace of God I am what I am, and His grace toward me did not prove vain” (1 Corinthians 15:9, 10 NASB).

To know that gap and have Jesus Christ fill that gap is to know His power. To seek to fill it yourself is unending sorrow. To have a helpmate given by God to help you to name the gap, give the gap to God, and walk through it is a blessing beyond blessings.

That glance, that look of love, from Anne Kennedy to her husband, as he as he went to the pulpit to preach, was, I believe, God’s incarnational way of expressing the healing power of the Comforter to the “preacher’s gap.” Was it not a glance of grace? The effect? Dr. Kennedy preached to more people than any Presbyterian minister in history. His record of service continues through a church he and Anne served (and for all the recent tribulations of that honored ministry, the present pastor, Reverend Rob Pacienza, one of my former students, welcomed Mrs. Kennedy back with a time of appropriate honoring her; and he was ministering to her in those days, as was Rev. Carter). Their legacy, also, continues through ministries Dr. Kennedy founded—D. James Kennedy Ministries, Knox Seminary, Westminster Academy, Evangelism Explosion—and even a legacy ministry designed to fulfill his desire to help young pastors, a ministry—the D. James Kennedy Institute—that Anne (and Jennifer) bestowed to this author from her living room, just a few years ago. This summer that Institute will be launched through an entire denomination to reach the wider Church. Each of these ministries bore Mrs. Kennedy’s touch. In other words, when the redeemed spirit of Anne Lewis Kennedy was translated and transmigrated to the presence of her Savior, Jesus Christ, on May 16, 2017 (and earthly time, relative to beginnings and endings, became irrelevant in the presence of undiluted beauty and pure, perfected Edenic consciousness) a multitude of souls would have thanked Mrs. Kennedy for her faithfulness in sharing the Gospel each week for five decades, personally leading a great host of lost souls to eternal security. But, one spirit there, “known even as [we are] known” (1 Corinthians 13:12) might have returned a glance. For it was he, James Kennedy, who was in the heavenly choir on that day when—this time—she processed to the Lord’s banqueting Table.

I wrote a song for my wife, once, a line of which that I think of at this moment for Anne and all pastors’ wives:

“If there’s crowns on that day, and I have my way, I pray the Lord give you mine; when people heard me, what they didn’t see was the deepest part of my life; thank God for the pastor’s wife” (“Pastor’s Wife.” © 2005 Words and music by Michael Anthony Milton).

These are the images, the sounds, and impressions that came to me when I heard of Anne Kennedy’s passing.

The joy of Anne and Jim’s life was their daughter, Jennifer. And Jennifer’s loving care of her dad, then, years of faithfulness to her mother, more recently, remains a monument to Christ’s love within this family and a model of Biblical family life.

Yet, Anne, like so many of our wives, is that special, refined and irreplaceable creation of God in the family that gave life and love. For, she was—she is—the virtuous woman of Proverbs 31, who understands that men are incomplete without women, depend upon their love, are forever little boys picking wild flowers and weeds to win their approval; but, when maidenly approval is granted, old wounds are healed, flagging nobility is crowned, and soldiers find the courage to go forth into battle. This is part of what is meant in the Proverbs: “Her husband is known in the gates, when he sitteth among the elders of the land” (Proverbs 31:23 KJV).

This is a picture of Anne Lewis Kennedy. And without Anne Kennedy, Jim Kennedy could never have been Dr. D. James Kennedy. 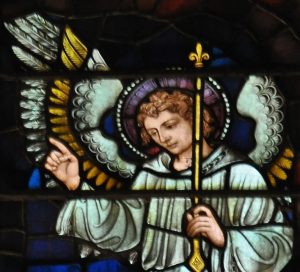