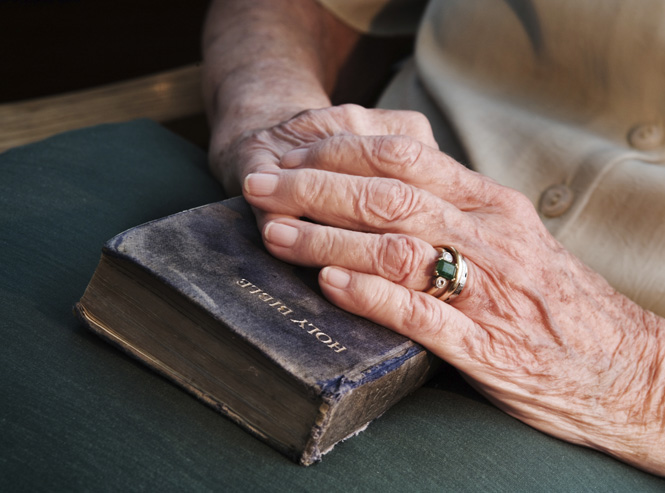 When I was teaching and preaching in India, I encountered many strange and exotic things. It is said that India assaults all of your senses at once. This was in a way true for me. As my family and I went to great, expansive megalopolis such as Madras (now called Chennai) and then to New Delhi, our next stop was up to the beautiful northern area where Dehradun sits near the Ganges River. That magnificent body of water flows majestically, mysteriously down from the misty, green, distant, but visible Himalayan Mountains. There we found something—or someone—whom I recognized. I want to talk to you about her. I found her coming to me in several persons.

In one place I found her as an elderly, toothless woman, her body wrapped in traditional Southern Indian costume, and her face etched with years of hard labor. My interpreters told me that she was uneducated and from a remote place. She went from tribe to tribe, from village to village. In another place, she was younger with children still at her side, not as revered; but she seemed just as wise, just as authoritative in the community. Yet in another case, I found her to be a middle-aged woman, roaming through the sprawling ghettos of the Indian capital, through the flashing neon lights of a city struggling to look Western, down the crowded boulevards of piled-up rubbish, past the lowing of the ghoulish-grey Brahman cattle. Who were they? They were “Bible women.” This is what the Indian Christians called them. The Bible woman is so-called because she knows the Word of God, and though not ordained to “preach” or to be a “minister of the gospel” by a congregation of any particular Christian church, she goes about, evangelist-like, telling Bible stories to the communities. She is revered by all—ordained and lay-people, men and women, boys and girls, believer and unbeliever. Back to why I recognized her amid this strange land with its strange customs. I recognized her because I was reared by a woman just like her. I was reared by a Bible woman.

I was orphaned as a little child. I was adopted by my Aunt Eva. She was about 65 when I was 9 months old and placed in her arms. I never knew a day when my Aunt Eva did not read the Bible to me, pray for me and lay her hands on my head. That is not why she reminds me of the Bible women of India. It is this: She was a teacher of the Word of God to the people in our little backward area of Louisiana. She never held a class or lectured. She was not educated at a seminary or Bible college. She had been taught by her father and mother and through what would end up being almost 99 years of faithful gospel preaching and teaching. She took the Word she had been given in those ways and ministered to others.

She ministered to the poor. She ministered to the merchants. Many times I have seen Aunt Eva opening her Bible to counsel, to teach a child or in some cases to lay her hands on the heads of grown men who came to her, weeping in the midst of business or marriage failures.

She taught me. She taught me, and she modeled ministry for me in ways that I aspire to even today. She was a Bible woman.

Whatever your understanding is of the ordination of women, I can tell you that I believe God set apart my Aunt Eva to teach me and many others the Word of God. She never would have set foot in a pulpit herself and felt that to do so would be unbiblical. She was outspokenly complementarian, a word she never would have known but a concept that she always affirmed. Within the biblical role relationships that she sought to live out from her convictions in the Word of God, she probably influenced more souls for salvation than many (male) pastors I know. That was her calling, her gift, her open door, her role.

There were many Bible women in the Word of God. In fact, I always am amazed at how God used women in the history of His people: to stand in the gap to lead Israel to war, as in Deborah’s case; to save God’s covenant people from annihilation, as in Esther’s case; or the greatest example of all time, to raise the Lord Jesus Christ from infancy to manhood, as in Mary’s case. In times of great trial, often in times of apostasy, the Lord chose a Hannah or a Ruth to bridge the gap between corrupt judges and faithful prophets. Maybe today is such a time. Maybe in days of great trial, God will raise up Bible women to roam the land, to teach the poor, to counsel the wealthy, to help all of us see the glory of Christ in our midst. How we need these mothers in Israel today.

My views on women in ministry match those of my Aunt Eva’s. I am a complementarian because I believe the Bible teaches a role relationship of men and women in the body of Christ that matches the role relationship God established in the created order (e.g., 1 Timothy 2:12-15), but let it not be said that this view, which is the unassailable majority position in the church for two millennia, precludes effective ministry for women in the body of Christ. Nor do I believe this is an issue that should impair relations between those fellowships that differ on the issue based on hermeneutic positions from the Word of God. Indeed, we need godly, strong Bible women in our churches, in our families, in our world. Let them lay hands on our heads and soothe our weary brows. Let them teach us to pray by their untiring example. Let them tell us the stories of the Bible. Like me, some of our ministers might want to pause and sit at the feet of these Bible women and listen to the stories of God’s faithfulness. I have done so many times as a pastor in nursing homes or hospitals or in a home listening to the professions of faith of children taught by their mothers. How I wish I could leave even this very moment and sit at my Bible woman’s feet! But my Aunt Eva is with the One she proclaimed, the One she taught me to love.

Sometimes when I hear someone wonder about my commitment to the ministries of our young women and ladies studying in seminary (because of my own denominational affirmation—I am a minister in a church that ordains qualified and tested males only), I listen with the secret I can’t wait to tell them. I listen and I have to be patient. I want to hear of their strong convictions on the issue (for we want to cooperate with each other without compromise). Sometimes when I listen though, I seem to detect an assumption that because I hold to a complementarian view of the role relationships of men and women, I somehow cannot genuinely comprehend the place of a strong, gifted woman exercising gifts in the body of Christ, that maybe I even have a hang up about strong women in general.

Eventually I tell them that I not only was reared in a single-female head of household, by a woman who threw the football with me in the backyard when she was seventy-five years of age, and who worked harder in the fields than any man I have ever known, but also that I was taught the Word of life by this strong woman and I watched her minister Christ to others. I have to tell them that a strong woman influenced my life more for Christ than anyone else. I have to tell them that my first seminary class was in her lap, learning the truth of God as she read the Bible to me; I heard the Scripture spoken in one ear and her heartbeat in the other as I lay my head against her, cementing the Word of life forever within me in a most incarnational way. I have to tell them that I grew up with only this strong woman, with no man in the home or in my life. I have to tell them about my wife, a person with deeper spirituality than my own (I think) and a sense of God’s presence that is indescribably but demonstrably greater than my own.

Amid the clamor and contentious spirit of this age, which seeks cultural relevance at the expense of provoking the saints with theological and ecclesiastical novelty on the one hand and disdain for the old paths on the other, there are many women—uneducated, educated, homemakers, lawyers, Sunday School teachers, pastor’s wives, missionaries, college professors and homeschooler moms; Baptist, Methodist, Presbyterian, Anglican and many others—happily, productively fulfilling the purposes of God, teaching the Word of the Lord, spreading the gospel, with many of us rising to call them blessed as the Kingdom goes forth through their faithful message. While some scramble to see who can be more egalitarian, armies of Christian women are carrying Jesus Christ to the world without any concern for ordination to the offices.

All of this leads me to this closing prayer for our generation: I long to see in our seminary, in our nation, in our world what I saw in India, what I saw in my home: more Bible women.

“Oh God, raise up Bible women this day and let them know of our joy in their presence among us. May they increase to the glory of Thy name and the good of Thy church. Help us to return to the old paths that lead to submissive spirits beneath Thy Word, more satisfying to our souls, more effective for Thy Kingdom and more pleasant in our churches. In Jesus’ name. Amen.”