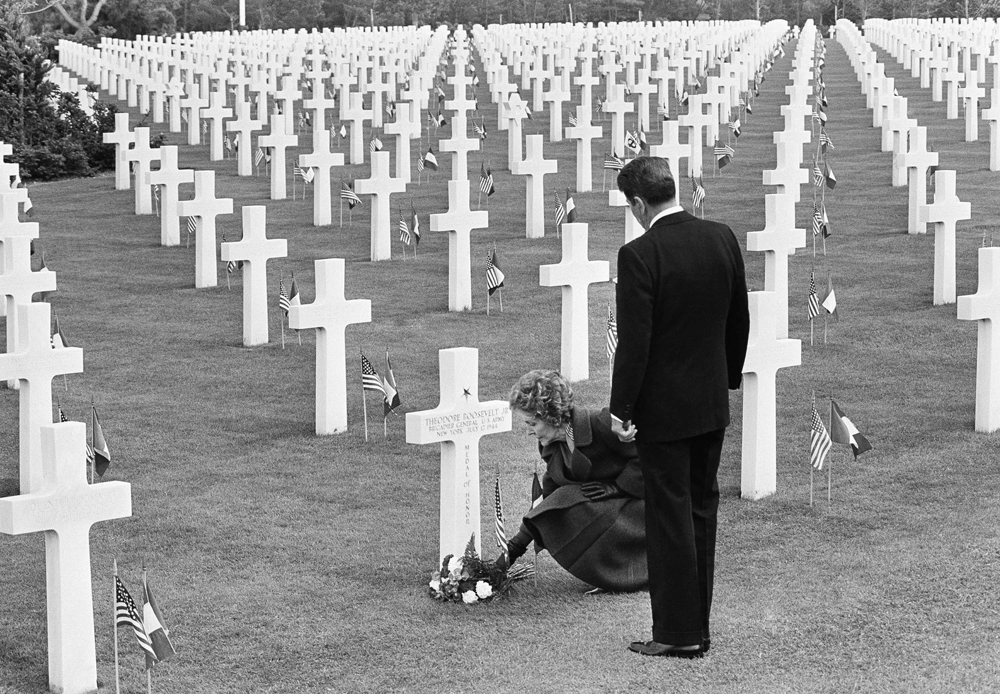 “Lead the way, Rangers!” The motto of the United States Army Rangers was first given as an order and a stirring one-line speech at sector Charlie on 06 June 1944 as the 2nd Ranger Battalion was engaged in securing its mission: Pointe du Hoc. At 0600 Lt. Col. James E. Rudder led 225 men from his British host ship and landing craft and began the operation to take out German Nazi gunners, so that Allied troops could make it to the French shore. Admiral Sir Bertram Home Ramsay, Naval Commander-in-Chief of the Allied Naval Expeditionary Force, “the forgotten man of D-Day,” oversaw Operation Neptune, but the liberation of Europe in 1944 began with the decision of a Kansas farmer’ son, Dwight David Eisenhower, and the tactical on-the-ground leadership of a plain no-nonsense Texas farmer, James Rudder.

George VI spoke via the BBC to the British Empire, urging prayer and appealing to God throughout his speech. The speech, in his clipped English and long pauses, forgiven for his speech impediment, seemed to actually make the speech all the more emotional. George VI’s voice went throughout the Realm, that in day that was, literally, all over the world. The King’s speech was, also, broadcast live to the United States. President Franklin Delano Roosevelt went on radio to lead the People of the U.S. in a moving and devout national prayer for victory. British and American leadership, thus, forged a backbone of prayer as the Allied armies and navies came to the ancient Gaulish shores, not for conquest, but for liberation.

No one has captured the sentiment of that day for the Rangers in one speech better than President Ronald Reagan. In his 06 June 1984 speech, marking the fortieth anniversary of D-Day, President Reagan not only gave eloquent and moving elegiac words to memorialize the courageous men of that day, he reminded the audience of survivors and, of course, posterity, why we fight and even give our lives when necessary.

Reagan’s Point du Hoc speech is, now, one for the ages. It is a speech that in many ways mapped out his position that led to the end of the Cold War, as he wove together the ethical framework for victory in 1944-45 and the struggle the West faced, then, with the Soviet Union and Communism. There is much to study here for many different disciplines of scholars. Yet, I would point to the ethics that Reagan espoused in the speech. These ethics—ethics that are clear in the speeches of George VI and FDR—were ethics that were grounded in more than civic values. The ethical ground was religious in nature, moral, and deeply spiritual. There can be no questioning that the ethics espoused by the King and the President, reflected in Reagan’s words forty years afterwards, were thoroughly Judeo-Christian. This did not mean that the King was indifferent to the Hindu and Muslim adherents in his Empire, but that the moral foundations of Empire were unapologetically bound to the Holy Scriptures of Moses and Jesus, of David and St. Paul. Courage, justice, and patriotism were values that emanated from that ethic, not the ethic itself. Indeed, the Judeo-Christian ethics of the English-speaking Peoples (and others, of course) allowed the diversity needed within the Empire (an Empire that by the way the King appealed to God to use for good and for His greater purposes on earth). This was not popular sentimentalism. King George VI was standing on the green-grassy field of Runnymede as he appealed to the Christian ethics of Magna Carta of 1215. Likewise, Roosevelt’s stirring prayer was not a breach of the Church-State wall, a wall erected with newly fashioned, easily corruptible  stones of misunderstanding in our own day, but rather the older foundation stones of respect for the religious nature of Mankind and the need for Almighty God’s favor. These are the ancient ethical landmarks cited and enshrined in the U.S. Constitution’s First Amendment. Moreover, Roosevelt was repeating the same covenant language of the Mayflower Compact of 1620 that came from the Winthrop vision cast in his 1630 sermon on the Arbella: the sermon that gave us “a City on a hill” self-identity as a people. These were the ethics that the men fighting could recognize as giving them the courage they needed to fight, as well as the depth of perspective to endure the gruesome and utterly inhumane sights and sounds of war.

Vietnam marked the first widespread crack in the ethical ground of the United States Armed Forces. The ethical ground continued to erode, shaken by domestic politics and cultural regression, until the ordinary Soldier, Airman, Sailor, Marine, Guardsman, or Merchant Mariner could no longer make sense of his actions in war. Of course, few of them were or are, now, reading Foucault and Nietzsche, to diagnose the postmodern relativistic termites that devour the ethical foundation on which to stand and fight. Yet, the Soldier of today knows, intuitively, that the ethics inculcated in the new model Armed Forces, based as they are on civic values rather than distinctively religious ones, are not the “right and wrong,” “good and evil” ethics taught him on his mother’s lap. Yet, clearly, religious ethics are the kind of ethics that give meaning for fighting and winning a battle against an enemy that is evil, an evil defined by opposition to the Law of God, written on tablets of stone and written on our hearts. The sad result of this may be the dramatic increase in “moral injury” trauma and even in the suicide rate in the Armed Forces. I am not the first to hypothesize this idea. I speak as a minister who has ministered to too many Soldiers with suicidal ideation. I speak out of my pastoral experience to comfort grieving families who have lost loved ones, Veterans, to suicide. The more recent ones are beginning to bother me even more. Maybe it is my age or just the accumulation of too many young people dying as they try to make sense of not just war, but life, in general, in the new secular world of lost boys and girls. So, I don’t care too much for being politically correct. I prefer to name the problem for what it is and begin to find ways to cooperate where I can and treat the problem. We must labor for the greater good. Of course, social scientists will, rightfully, want to pose the research question, test the hypothesis with quantitative methods, but I just know what I see in the eyes of young men and women who can longer make sense of seeing the remains of a little girl blown to pieces by a suicide bomb.

“This is evil. It is not God’s will. The horror of it is born out of an evil heart and system that must be defeated and defeated now. There is a right and there is a wrong. But, no one is telling me I am on God’s side. But I know that these beasts who kill children are not. I am having trouble fitting this all together. And why don’t we fight to destroy them? Why don’t we ‘take the beach?’ and get this thing over?”

These are sometimes, perhaps, the last thoughts of the victims of the new ethic.

Religious ethical foundation stones make all the difference. King George VI knew it. FDR knew it. Ike and Lt. Col. Rudder knew it. And Reagan reminded us that this is why wars must be fought and why they must be won. For one who is growing weary, in mind and soul, of tending to broken people with no solid ethical ground on which to stand, we need to recover that ground if we are to survive as a People.