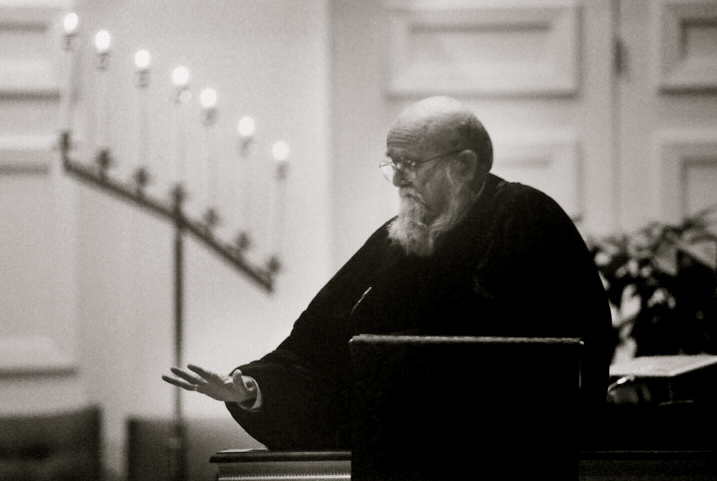 Doctor of the Church

Hughes Oliphant Old, who was called home on 24 May 2016 to his God and Savior, Jesus Christ, whose Gospel he preached and taught over a remarkable career that spanned a great part of the mid and late Twentieth Century and the first decade of the Twenty-first, held the John H. Leith Chair of Reformed Theology and Worship at Erskine Theological Seminary. As a more recent member of this esteemed faculty I did not have the joy of laboring alongside of Dr. Old as colleague (though, I commended his works while I served as chancellor-president of RTS), but, like so many preachers, pastors, evangelists, missionaries, scholars, seminarians, and, indeed, Christians of all kinds of callings, I was greatly influenced by this remarkable pastor-scholar and the fruit of his labors. Indeed, I knew Dr. Old as a young pastor engaged in new church development. I met him through my friend, Dr. Terry Johnson of Independent Presbyterian Church (who studied under Dr. Old at Erskine) and had the pleasure of spending more than a few occasions with him as we talked about the development of the Reformed liturgy and the unique contribution of its legacy within the Christian Church. More than any other part of that liturgical heritage I grew to appreciate Dr. Old’s attention to the rightful priority of the “Pastoral Prayer” in the order of morning worship. Indeed, as I was called to be the senior minister of a large, historical downtown congregation and I was seeking to find common ground with those eleven shepherds who had gone before me, since the church’s founding in 1840, I learned that one of my pastoral predecessors at First Presbyterian Church of Chattanooga (Dr. James Fowle) had “been accused” of spending more time preparing for the pastoral prayer than the sermon! This appreciation of the “Long Prayer,” from the mid to late nineteenth century on through first quarter to half of the twentieth century, was not uncommon. I kept Old’s Leading in Prayer: A Workbook for Worship next to my Bible in planning for worship.

The loss of this priority in the Presbyterian and Reformed liturgical practice had caused Dr. Old to research, write, lecture, teach, and produce volumes of peerless scholarship in support of a renewal of public prayer from the pulpit, Word-centered worship and preaching, and faithful Reformed eucharistic practise. His work has had an enormous impact on current scholarship in preaching and worship, but, we would all admit, not as much as he would want nor as much as we desperately need in this troubling hour. Yet, this may be his theological legacy: Old has deposited a tremendous storehouse of theological witness to (not merely his own considerable talents, and those talents are the kind that would shine in an era of a Hodge and Warfield, much less in a day such as our own) the heavenly-weighed glory of the divine Truth preached in Word and Sacrament that we need in all of its full, robust, and unalloyed richness. We live in desperate days of spiritual and moral famine.  There is an urgent need for a recovery of a doctrinally serious, spiritually deep, and Biblically sound theological tradition applied in evangelical preaching and worship; the kind that Hughes Oliphant Old taught and preached—a tradition that is the wellspring of a hopeful legacy that will build an ecclesial levee system needed to stem the tide of toxic flood waters carrying mindless and soul-deadening diseases now threatening the Church. Dr. Old’s body of work is part of that needed buttress of well-reasoned and time-tested teaching that will help return dignity to our pulpits, reverence and awe in our worship, seriousness in our studies, humility in our relationships, and wonder in our souls. Renewed practice of Reformed liturgy, centrality of expositional preaching, a reverent and studied appreciation for Eucharistic commitment in Presbyterianism, and a fresh recommitment to God’s mission in the world through it all is undoubtedly the Church’s priorities, as we wind our way into the ominous season before us. The present climate of trendy pop-culture-evangelical applied theology is likely unsustainable, often evanescent, and could well be vaporized at the first tactical movement of a broader strategic Satanic hostility. Dr. Hughes Oliphant Old’s theological legacy is, thus, much more than an academic footnote in the American church. The “Reading and Preaching of Scripture” in the history of the Christian Church is a book of lessons brought forward from the wisdom of the Ages to a modern church that might possibly be launching out into deep, dangerous waters of persecution. Sage, prayerful spiritual warriors engaged in the inevitable coming joint operations—Reformed, Evangelical, Pentecostal, Lutheran, Catholic—will study the “manuals” by Old like generals study scholars from War College to prepare the troops for battle in days to come.

The legacy of the Reformed liturgy that Dr. Old deposited at Erskine Theological Seminary and Princeton Theological Seminary before that—and through his writings to the Church in the world—is only the glorious Gospel of worship and prayer that has been, is, and must be unleashed with excellence in all things and all things for Christ:

“Whereof the Holy Ghost also is a witness to us; for after that he had said before, This is the covenant that I will make with them after those days, saith the Lord, I will put my laws into their hearts, and in their minds will I write them; And their sins and iniquities will I remember no more. Now where remission of these is, there is no more offering for sin. Having therefore, brethren, boldness to enter into the holiest by the blood of Jesus, By a new and living way, which he hath consecrated for us, through the veil, that is to say, his flesh; And having an high priest over the house of God; Let us draw near with a true heart in full assurance of faith …” (Hebrews 10:15-22a KJV).