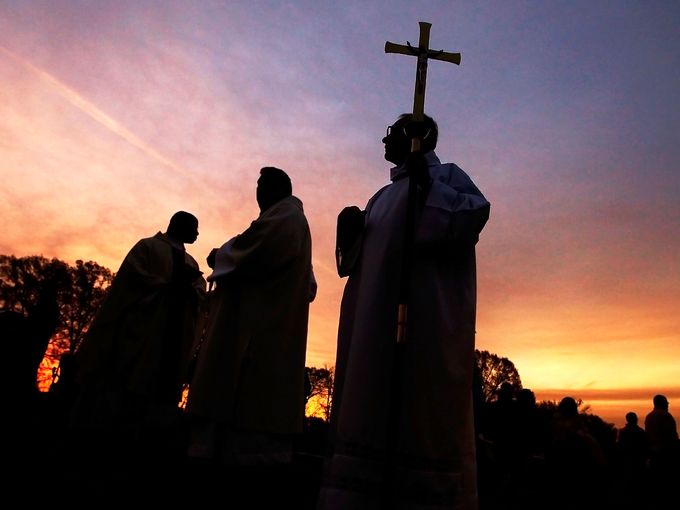 I will never forget that scene. I was a young ministerial candidate at the bed of a man who had died as I held his hands. I had just heard his final confession of faith in Christ. His widow fell into my arms sobbing. Her cry was the universal cry of every person who has ever experienced the loss of a loved one, “Will I ever see him again?”  Indeed, if we were to trace the mitochondrial lines of this woman to her ancient grandmother in some far-away cave deep in the Neander valley of modern day Germany, we might see a similar scene, an ancient figure holding her life-long mate, her husband, if you will, as she looks into the mysterious starry night and utters unintelligible groans, “Will I see him again? Is this all there is?”[1]

Recent archeological expeditions have unearthed surprising finds of families buried together in age-old cemeteries, side by side, destroying older ideas about Neanderthals in Europe.[2] Now, we understand that they had the same questions about death and the hereafter as we do. Questions about what happens to us when we die are as old as Adam and Eve.

As a pastor I have seen that very picture in my ministry through the decades many times. The questions remain the same. Death is a familiar, if not foreboding spectral force that I have seen assault the lives of my own family and the families of so many of our people and leave us with the same questions as as ancient ancestors. Not much has changed. Or, has it? There are two philosophies to respond to the matter. Uniformitarianism says that life in the world goes on as it has always been. Catastrophism is that scientific theory and philosophical school that holds that something has happened of a catastrophic nature to change things in the world. Christianity rejects the former and is built upon the latter. Cambridge educated scholars like Trevor Palmer, of Nottingham Trent University, have alerted us that to deny that geology and history itself is built upon catastrophe is to be delusional.[3]

The Apostle Paul picked up on that theme of death and what happens when we die in 1 Corinthians 15. Some had taught, even as in Jesus’ time, that there was no resurrection from the dead. Others had taught—and this is dealt with in another place—that the soul merely sleeps in the grave until Jesus comes again.[4] Paul, in refuting this bad theology, advances a powerful argument: that the resurrection of Jesus Christ is not only central to the Christian faith, but it is the centering point on the salvation plan of God in human history. As such, this event has powerful consequences for dying, but also for living.

This leads us to a tremendous truth for our lives this day. In the resurrection of Jesus Christ, God has overcome the dark tomb of our ancient despair with the bright promise of His new hope.

What are the articles of this new hope in Christ’s resurrection?

1.     New hope is made possible by a new world order now expanding.

There have been tales of a “new world order” and conspiracy theories about some global alliance with that very phrase. There may be one. But there is an undeniable one afoot! This new world order is now here and under way. It is not a new world order that is based on politics or finance or international relations. It is a new world order that is greater than all of those and greater than all of the kingdoms that have ever been or ever will be. It is a “Gospel conspiracy” that is taking over the earth through love and grace. It is consuming the earth one person at a time, and as of today, hundreds of thousands of people per day who are confessing Jesus Christ as Lord.[5]

St. Paul says that “As in Adam all die, in Christ shall all be made alive.” He is saying that “All” includes all humanity. We are all sons and daughters of Adam. We all die because we are children carrying the virus of sin. Sin produces death. But for all who turn to Jesus Christ through repentance and faith, they will receive resurrection life. They will be made alive.

The Scriptures teach that when we receive Jesus as Lord we pass from death to life. We are liberated from judgement. At death we pass immediately into the presence of the Lord by the righteousness life and the sacrificial death of Jesus. And at the second coming of Jesus Christ our bodies will rise again from the grave and we will be, body and soul, complete in a new heaven and a new earth.[6]

This means that the old enemy, death, has been dealt a great blow and is on its way to terminal defeat. Previously the Psalmist would argue that in Sheol no one could praise God. Yet, in the Book of Revelation we see the saints praising the Lamb, Jesus Christ, gathered at the throne of God! Something has happened, and that “something” is the resurrection of Jesus. This is why the Bible will say, “Precious in in the eyes of the Lord is the death of His saints.” This is why St. Paul will conclude this magnum opus on the resurrection with his unforgettable line,

This is our first article of faith based on the resurrection: we have new hope because there is now a new world order: a world order that promises new life now and eternal life when we die. Because of the resurrection, everything has changed. But have you changed? Have you entered this new world order? Are you a citizen of this new kingdom? To be a citizen requires that you are a subject to the King, our Lord Jesus Christ. And that requires that you relinquish all other allegiences, including allegiance to yourself. Will you now unreservedly give your life to Jesus of Nazareth? Will you confess that you, too, like I am, are a sinner and in need of a Savior and that Jesus is that Savior, sent to live the life you cannot live and who died the death on the cross for you? Will you confess that He rose again from the dead on the third day in accordance with the Scriptures? Will you now receive Him as the resurrected and living Lord of your life? Will you now follow Him? If you have not been baptized, you must see me, and come and be baptized for remission of your sins and to be numbered with His people.

One final word:  New hope is made possible not only by a new world order, but something else:

2. New Hope is made possible by an Ancient Cosmic Vision now approaching.

Verse 28 is one of the most mysterious, but glorious passages in all of the Bible. Paul gives us a glimpse of the glory of a fulfilled vision of God’s plan.

What is this saying? Paul is looking to a day when the full plan of God is complete. All of Christ’s resurrection work of dying for the people is finished, the people are saved, brought in, the new heavens and the new earth is here, and the kingdom if now functioning. That which was ordained has come to pass. The Triune God, whose three Persons were deployed on our behalf, to save us, to save this world, to recreate, and bring us back to our Creator, is complete. In some sense, this is a new Sabbath. God is once again resting. His children are at peace.

When I was a boy I remember that a beautiful scene on Easter morning was a processional of an early morning worship service of choir and the minister, with acolytes holding the cross, going out into the cemetery. There, surrounding by grave stones of loved ones, a few of us, shivering from the chilly, early-morning spring air, would sing, “O Victory in Jesus, My Savior Forever” and recite the Lord’s Prayer. Worshipping the living Christ amidst the tombs is a powerful way of expressing new hope.