Is historical philosophy a preferential tool for trusted evaluation and analysis of current political and religious phenomenon? This was my question. Following the footnote trail I have found myself in a very good place for discovery: Perry Miller of Harvard and the Puritans. I found this quote and it seems to me to explain the place of Puritan thought in the “American mind” most succinctly and most authoritatively. Perhaps it will be of good use to some enterprising scholar out there. I urge you to read Perry Miller. Read Marsden to understand what Miller misses on the Puritans—Jesus—but read Miller to understand the strain of thought that has created, more than anything else, the American mind.

Any inventory of the elements that go into the making of the ‘American mind’ would have to commence with Puritanism.It is, indeed, only one among many: if we should attempt to enumerate these traditions, we should certainly have to mention such philosophies, such ‘isms,’ as the rational liberalism of Jeffersonian democracy, the Hamiltonian conception of conservatism and government, the Southern theory of racial aristocracy, the Transcendentalism of nineteenth-century New England, and what is generally spoken of as frontier individualism.  Among these factors Puritanism has been perhaps the most conspicuous, the most sustained, and the most fecund. Without some understanding of Puritanism, it may safely be said, there is no understanding of America. (Miller and Johnson, 1963, page 1)

The question remains: How will the Puritan strain in the American mind respond in the face of an overwhelming moral crisis? Will the Puritan strand be activated—a merciful divine intervention on behalf of faithful pilgrims thirteen generations prior—a cry for revival heard from the faint light of that “city on a hill?” Or has the spiritual genome finally been diluted to the point of extinction?

A nation’s survival may very well depend upon the answer to that question.

“Blessed is the nation whose God is the Lord; And the people whom he hath chosen for his own inheritance” (Psalm 33:12).

_____. The Puritans: A Sourcebook of Their Writings: Two Volumes Bound as One. Mineola, NY: Dover Publications, 2001. 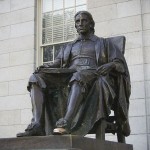