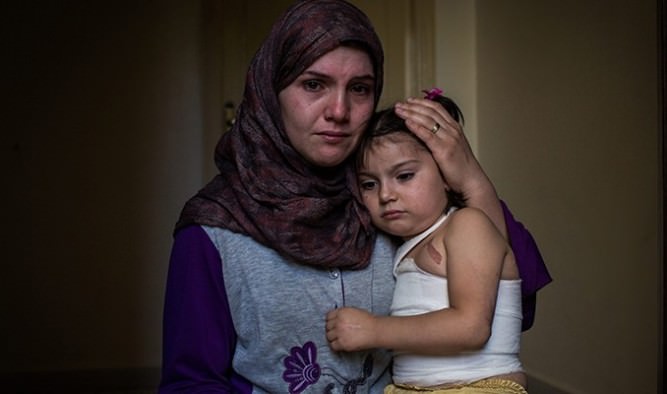 Let us pray for the poor refugees fleeing from the bloodstained hands of ruthless regimes.

Father, whose only begotten Son, our Savior and God Jesus Christ, became an exile in His infancy, as his earthly father, Joseph, guided him and His mother, Mary, away from the oppressive hand of a mad dictator and a murderous regime, so, hear our prayer for the poor refugees of Syria, Iraq, Libya, and other peoples of the Middle East and Northern Africa, now fleeing for their faith, their children, their lives, and their very humanity; that the beast-like powers that oppress these little ones will be stopped by Thy all-powerful hand, or that such diabolical deeds would be providentially frustrated so that the merciless acts of evil are turned against those who perpetrate them; and that the nations of the earth will not only find ways to aid those in their perilous plight (and we do offer unreserved thanksgiving to Thee for the evidence of Thy common grace in those nations, like Germany, using their wealth to help the evacuees), but also employ the divinely-authorized power of the sword or the wise leverages of state to stop the mouth of the beast before he devours more innocents; and that according to Thy glorious Gospel many of these Saul-like enemies of God, we pray, will meet the blinding light of love and grace in the immaculate person of the resurrected and reigning Lord Jesus Christ, in whose salvific merits and fathomless love for the poor we do earnestly intercede, petitioning Thee, O God, in that very name that is above every name, even Jesus Thy Son, Jesus our Lord, Jesus our King, Jesus the hope of the hopeless. Amen.