The Gospel lesson presents one of the most intimate and compelling passages in the Word of God: the “high priestly prayer” of our Lord Jesus. While I understand the frequent description of “high priestly” in this momentous point in our Savior’s earthy ministry I think the text would, also, encourage us to relate to the meaning here as a “lowly Shepherd’s Prayer.” How so? I find several fascinating—and most soul-enriching—instances of the shepherding ministry of Jesus here, which can be preached, not as a mere model for our lives, but rather as a means to excite the worship of Jesus in the souls of our auditors. And I point to one of these instances to suggest a possible development in your own sermon (or, dear believer, in your own devotions):

I might offer a first division in our argument as this: Jesus shepherds us in prayer to see glory in humiliation.

For John, who witnessed this intimate conversation between Father and Son, says this: “Looking up to heaven, Jesus prayed, ‘I have made your name known to those whom you gave me from the world.'”

He looked up, it says, and here we observe the most amazing truth: the Holy God who is One in Three, ever living, has appropriated His saving power to mankind through each Person of the Trinity. Within that opening phrase of John, “Looking up to heaven, Jesus prayed,” the glorious redemption plan of Almighty God unfolds to us in its mysterious simplicity. We therefore proclaim to the world that God in his infinite love has come to His lowly lambs and in His holy “humiliation” (and I am thinking of the Heidelberg Catechism:  Q. 27) our Lord has assumed the posture of one in need. For He who “belonged” in heaven—that is, heaven is His prerogative—chose to walk as a man upon the earth He made and to even pray to His Father for us. Oh what infinite depths of love and what majestic heights of glory that the Almighty should become a creature and appeal in holy prayer to Creator! We are on holy ground, indeed.

[I must say; the lessons for this Lord’s Day are filled with so many wondrous opportunities to preach Jesus in a doxological way! Oh that our pulpits would begin to catch fire through spontaneous combustion of prayer and praise! This is our hope for our souls and the key that unlocks the next passageway to progress in Christian discipleship.]

The Lessons Appointed for Use on the Seventh Sunday of Easter

O God, the King of glory, you have exalted your only Son Jesus Christ with great triumph to your kingdom in heaven: Do not leave us comfortless, but send us your Holy Spirit to strengthen us, and exalt us to that place where our Savior Christ has gone before; who lives and reigns with you and the Holy Spirit, one God, in glory everlasting. Amen.

In those days Peter stood up among the believers (together the crowd numbered about one hundred twenty persons) and said, “Friends, the scripture had to be fulfilled, which the Holy Spirit through David foretold concerning Judas, who became a guide for those who arrested Jesus– for he was numbered among us and was allotted his share in this ministry. So one of the men who have accompanied us during all the time that the Lord Jesus went in and out among us, beginning from the baptism of John until the day when he was taken up from us– one of these must become a witness with us to his resurrection.” So they proposed two, Joseph called Barsabbas, who was also known as Justus, and Matthias. Then they prayed and said, “Lord, you know everyone’s heart. Show us which one of these two you have chosen to take the place in this ministry and apostleship from which Judas turned aside to go to his own place.” And they cast lots for them, and the lot fell on Matthias; and he was added to the eleven apostles.

1
Happy are they who have not walked in the counsel of the wicked, *
nor lingered in the way of sinners,
nor sat in the seats of the scornful!
2
Their delight is in the law of the LORD, *
and they meditate on his law day and night.
3
They are like trees planted by streams of water,
bearing fruit in due season, with leaves that do not wither; *
everything they do shall prosper.
4
It is not so with the wicked; *
they are like chaff which the wind blows away.
5
Therefore the wicked shall not stand upright when judgment comes, *
nor the sinner in the council of the righteous.
6
For the LORD knows the way of the righteous, *
but the way of the wicked is doomed.

I write these things to you who believe in the name of the Son of God, so that you may know that you have eternal life. 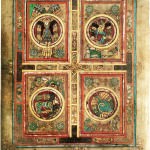 Optional parts of the readings are set off in square brackets.
The Bible texts of the Old Testament, Epistle and Gospel lessons are from the New Revised Standard Version Bible, copyright 1989 by the Division of Christian Education of the National Council of the Church of Christ in the USA, and used by permission.

The Collects, Psalms and Canticles are from the Book of Common Prayer, 1979.

This meditation and reading guide is part of a series of devotional thoughts on the lectionary readings from the Revised Common Lectionary. Believing that a spiritual program that is built around the life of Jesus Christ as He is revealed in all of the Scriptures is a Biblically faithful, Christ-centered, and Great Commission-responsive method of discipleship we support the concept of a liturgical calendar. We are not slaves to a system, but bond-slaves to Christ. Yet, even as we see Jesus following the selected readings in the synagogue in His weekly worship and observance of a cyclical or seasonal approach to formation, we seek to imitate Him. We offer these meditations and readings to encourage the lives of believers in Christ to live out the Gospel in their personal lives and in the world. The central act of personal and corporate worship of the Church, shaped by the life of Jesus through the Scriptures and prayer, remains the single greatest God-given method for building up believers and enfolding lost mankind into His Church. We will seek to publish these during the week prior the respective liturgical date in order to offer these resources to those preparing for the coming Lord’s Day.