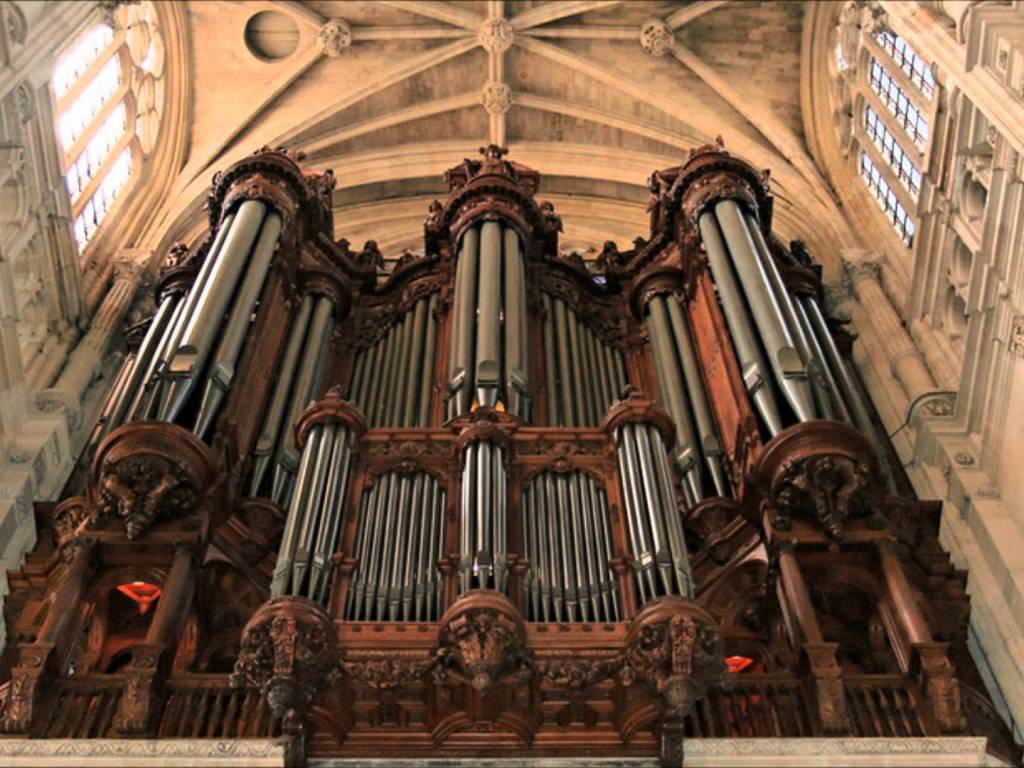 Before Thy Throne I Now Appear

It was 1750. There is a story, thought to be apocryphal by some, yet confirmed by others,[1] that as the great Johann Sebastian Bach[2] lay dying he dictated the music of his final great work, a chorale prelude, to his sons. Bach’s second son, Carl Philipp Emanuel Bach, even made an annotation in the original manuscript to the death of his father.[3] Whether it was literally dictated, as he neared death, or he reworked and completed an earlier effort, musical scholars agree that the piece was his last. He named this short liturgical composition, “Vor deinen Thron tret ich heirmit “ (“Before Thy Throne I now appear”):

Before your throne I now appear, O God, and humbly bid you, turn not our gracious face, away from me, poor sinner.

This sacred organ prelude was the final entry in Bach’s eighteen Chorale Preludes (BWV 651-668). Bach composed “Vor deinen Thron tret ich heirmit” in the style of the “fugue.” The fugue is a musical compositional technique, for the organ, in which the composer uses “voices,” established upon a dominant musical theme, and weaves them together, as one voice “follows” (“fugue” comes from the old French, based on the Latin fuga, to flee, give flight).[4] Thus, the composition is an instrumental chorale. Bach introduced a contrapuntal voice, a “counterpoint,” in which a primary voice is established in his “subject” (the main theme of the Fugue, which is revealed in the opening), with the alternate “voices,” the “contrapuntal” voices, following.[5] The organ’s chorale in three-part imitative accompaniment, then, moves to a connecting passage, or “episode.” The counterpoint voice is brought into full polyphonic harmony in the conclusion, the “Coda.” Through it all, the cantus firmus (“fixed song”), is a Gregorian chant used as the primary musical phrase.

How very fitting that as Bach prepares to enter eternity he writes a Prelude. The Prelude is a glorious introduction to an eternity in which divergent parts of life, like the several voices of the organ, are, at last, brought together. As music theorist, David Yearsley, wrote:

“Bach’s last piece is an elaborate demonstration of intricate contrapuntal technique used to treat a chorale text which both anticipates death and refers beyond it, to the arrival of the dead man in heaven.”[6]

Dietrich Bonhoeffer referred to Bach as he lay imprisoned at Flossenbürg Prison. The great martyr-of-the faith was reflecting on the “fragments” of one’s life that seems to lose meaning in the course of time. Yet, he finds that those fragments take on new meaning when seen in light of a God-redeemed world. He wrote,

“It finally comes to this, if one thinks about the fragment of our life, how the whole was really planned and thought out, and of what material it consists. There are finally fragments which still belong to the rubbish heap, and there are those fragments which are meaningful only when looked at in the perspective of centuries because their fulfillment can be only a divine matter, fragments which must remain fragments.”

Bonhoeffer, then, refers to the fugue:

“An analogy that comes to mind is the fugue. If our life also is only a slightest reflection of such a fragment, in which at least for a short while the various themes, growing ever stronger, harmonize, and in which the great counterpoint is held on to from beginning to end so that finally, after the breaking-off point, the chorale ‘Vor deined Thron tret ich hiermit’ can still be intoned, then we do not wish to complain about our fragmentary life, but even to be glad for it.”[7]

Bach enters heaven with a Prelude composition. Bonhoeffer faces martyrdom with a fugue analogy playing in his mind; the fragmented voices of life, then, coming together into a harmonious meaning. Thus, we recall the truth of the Scripture:

“And we know that all things work together for good to them that love God, to them who are the called according to his purpose (Romans 8:28 King James Bible “Authorized Version”).

The Fugue of Life

Our lives are a fugue. We look back and see the fragments of life, at first-glance futile and independent of any apparent main theme of life, at length, coming together, under God’s sovereign supervision, to make a whole. Even our pain, discordant as pain is, moves, finally, to somehow “imitate” the main theme, “to glorify God and enjoying Him forever.” We live and we shall die, but the fragments of our lives do not die. Singularities of life unite in a unity of life through the composing intentions of Jesus Christ. And life has meaning beyond what we could have ever imagined. Or, as C.S. Lewis wrote,

“And, for this is the end of all the stories, and we can most truly say that they all lived happily ever after. But, for them, it was only the beginning of the real story. All their life in this world and all their adventures in Narnia had only been the cover, and the title page: now at last they were beginning Chapter One of the Great Story which no one on Earth has read: which goes on forever: in which every chapter is better than the one before.”[8]

Your life, then, is, in Christ, a chorale and a prelude to a larger symphony that waits. Think on these things as the organist plays the Prelude to Divine Services this next Lord’s Day. All of that devotion spent for one liturgical musical piece? Bach must have thought he was composing for God.

[3] “Über dieser Fuge, wo der Name B A C H im Contrasubject angebracht worden, ist der Verfasser gestorben.” (“At the point where the composer introduces the name BACH [for which the English notation would be B♭–A–C–B♮] in the countersubject to this fugue, the composer died.”). See Wolff, Johann Sebastian Bach.

[7] This is from a letter of 21 February 1944. This translation is from Dietrich Bonhoeffer, Psalms: The Prayer Book of the Bible With a Sketch on the Life of Dietrich Bonhoeffer (Minneapolis: Augsburg Publishing House, 1970), 85-86.