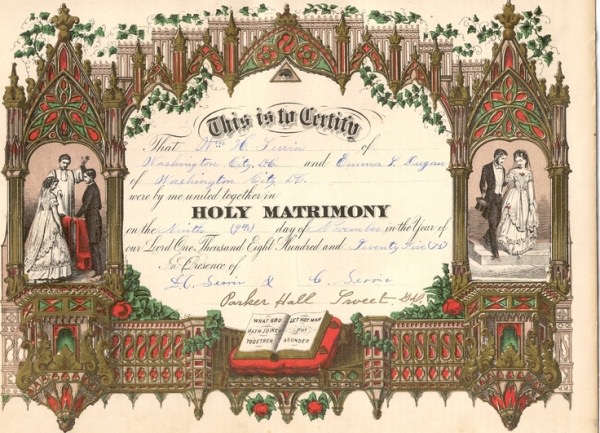 Alfred Austin (1835-1914), the Poet Laureate of England, who followed Alfred, Lord Tennyson, wrote, “Creeds were to them but chains to break; No formulas their thirst could slake.”[1]

There are many, today, who see “creeds and theological formulae” scattered, broken in pieces on the steps of courthouses through the land as the highest courts preferred the apparant safety of judicious silence over the clear precedent of world history, the great religions, and English law regarding marriage. Their silence was like thunder.

Hearts are broken that a nation has succumbed to the puerile demands of pitiable, but deceived boys and girls who cry for approval of those acts that are heretofore unspeakable. In our hasty decision to abandon the unambiguous testimony of Creation—and are we to be stoned for, also, adding that we are blatantly defying the God of that creation?—we have launched out into a dark and foreboding place, in which there is no turning back and no going forward. We have lost our way. The judicial hardening of hearts and self-induced searing of a national conscience will always seal the citizens’ exile from that Edenic land where once they ran freely through the sunlit uplands. Those who pass that way are consigned to the darkness they choose.

It is getting dark, now, little children.

One can put no positive “well, at least . . .” preacher-speak on this tragedy. Sin is exceedingly sinful. Shame is irreducibly shameful. Like being a witness to a horrific tragedy in our own home, we can only whisper a Doxology in the darkness, “God, have mercy. Christ have mercy.”

But it has been dark before. God’s mercy is greater than all of my sins.

“And all the wickedness in this world that man might work or think
Is no more to the mercy of God than a live coal in the sea.”[2]

Jesus of Nazareth, the God-Man, is, surely, now—if believers ever trusted in other powers to save us—the undiluted, singular, supernatural gift of light for our world, regarding marriage and all matters of faith and life.

Shall the institution of marriage that has lasted five thousand years endure? Or shall it be covered over by this fast-growing, freely-spreading breed of wild rose, a rose with no fragrance, made from its cutting?

“Let not the roses lie
Too thickly tangled round my tomb,
Lest fleecy clouds that skim the summer sky,
Flinging their faint soft shadows, pass it by,
And know not over whom.”[3]