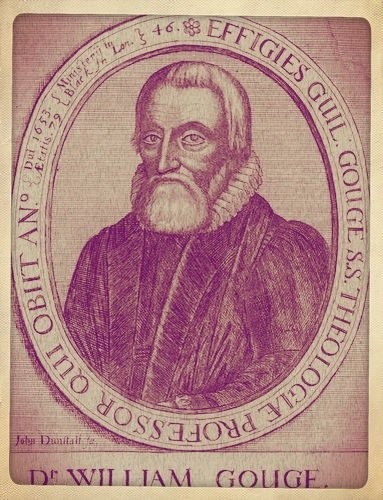 “The more purely God’s word is preached, the more deeply it pierces and the more kindly it works.”—William Gouge (1575–1653)

Dr. Gouge was the oldest member of the Westminster divines when Parliament appointed him to serve in 1643. He eventually became chairman of the Committee to write the Westminster Confession of Faith. William Gouge was pastor of St. Anne’s-Blackfriars church near the London Bridge on the River Thames. For over four decades Dr. Gouge ministered at Blackfriars (1608-1653). For many of those years this renowned pastor and celebrated educator was called to become a professor at his own university of Cambridge, where he had once been a popular lecturer. The Etonian and King’s alumnus, reportedly, told the inquiring university officials “the height of my ambition is to go from Blackfriars to heaven.” Dr. Gouge’s life was marked by a singular devotion to preaching, writing, and Biblical scholarship poured through the narrow channel of obvious pastoral love for his flock. In a day when it appears that many clergy might prefer to escape from the seemingly confining definition of the parochial calling, and the inevitable human messiness that accompanies such a humble vocation, and when the demanding life of Biblical scholarship is too often exchanged for the less demanding, less prophetic, and, thus, less confrontational life of, say, a celebrity speaker, Dr. William Gouge remains a noble reminder of what God calls a pastor to be. William Gouges’ Commentary on Hebrews is an essential Puritan resource in any New Testament collection. Yet his greatest contribution may be the model of his life lived so well and his ministry conducted so honorably that both continue to be held as brilliant examples of pastoral piety over 360 years after he graduated from Blackfriars to heaven.

Brook, Benjamin. The Lives of the Puritans: Containing a Biographical Account of the Those Divines Who Distinguished Themselves in the Cause of Religious Liberty, from the Reformation under Queen Elizabeth to the Act of Uniformity in 1662: In 3 Volumes. London: Black, 1813. Print.

Gouge, William. A Commentary on the Whole Epistle to the Hebrews: Being the Substance of Thirty Years’ Wednesday’s Lectures at Blackfriars, London: Before Which Is Prefixed a Narrative of His Life and Death. Grand Rapids, Mi.: Kregel Publications, 1980. Print.