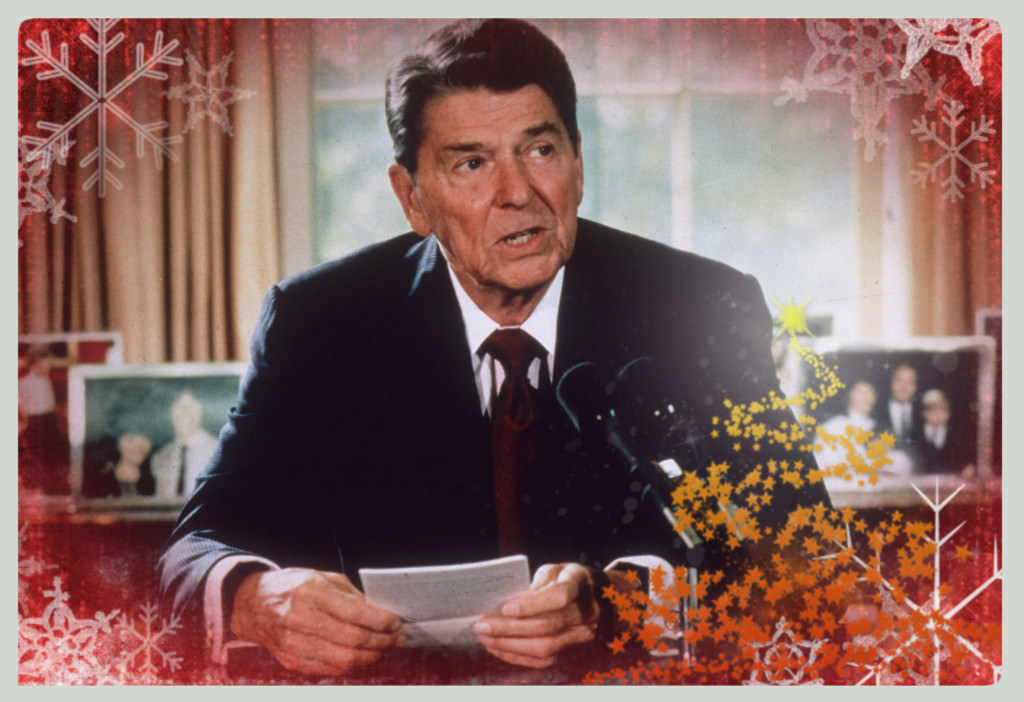 “The Child born in Bethlehem…was and is the promised Prince of Peace…” These words were spoken by President Ronald Reagan in his first Christmas address from the White House in 1981.

In his first year in office, during his first Christmas address to the nation, the President took the opportunity to share his own faith with the nation. A complete text may be found here along with the video.

Ronald Reagan knew that he was addressing a  nation filled with a host of people expressing their faith in many ways, as it should be in America. Yet as president he modeled that one did not have to leave faith at the door just because one worked in a government building. So he shared his faith that the Child in the manger born that night was more than a baby. He believed that He was the Lord. He went on to speak to the Jewish people of the nation who celebrated Hanukkah and to encourage people of all faiths. Yet the President did not hide his own faith in Christ. In fact, Reagan used Christmas to reach out to Poland. The Polish government had used “brute force” to intimidate the labor movement in that nation. Reagan called out the Soviet Union and warned of “serious consequences” of the inhumanity perpetrated against them. Reagan called for Americans to stand in solidarity with the Polish people at Christmas.

The Washington Post printed the President’s address, but did not print the first part of his address, the theological part. President Reagan’s pastor at National Presbyterian Church in Washington D.C., The Reverend John Boyles, was flabbergasted. According to Pastor Boyles’ own testimony at the 7th Center for Vision and Values Lecture, February 5, 2013, at Grove City College, he wrote to the Washington Post to protest what they had done. Nothing happened. So the pastor printed the entire address in the church bulletin. Reverend Boyles said that was surprised when the received a note from President Reagan thanking him for printing his address, including his testimony about Jesus Christ. Having recently transferred his membership into the church from Bel Air Presbyterian Church in California, President Reagan added in the hand written note, that he never wanted to embarrass the pastor or congregation or to let them down. The pastor could not believe that the POTUS was reading the church newsletter! Yet it revealed what President Reagan felt was of supreme importance: religious liberty.

He would later demonstrate this in his dealings with Mikael Gorbachev and with other world leaders. He would prove this with seeking the asylum of Jews who wanted to leave the Soviet Union to immigrate to Israel. He would prove it in his support of Roman Catholics in Eastern Europe.

And this is what we learn: we must not muzzle anyone of any faith, including evangelical Christianity, conservative Jews and Roman Catholics who so often do get muzzled. If those, whose voices represent the main voices of freedom in Western Democracy are shut up, then other religions will soon be silenced as well. Islam flourished here because Christianity and Judaism are strong. If the faith of the Bible is silenced, on which Western Civilization rests, then those of other faiths or no faith will be subject to harassment or worse.

Religious Liberty is the first right of all rights. That is a great legacy lesson of President Ronald Reagan. It is a legacy needed to strengthen our national conscience this Christmas more than ever.

That night President Reagan quoted G.K. Chesterton in his televised Christmas address to the American people. His words remind us of what we face this Christmas and every Christmas when faith in the Prince of Peace is undermined:

“The world would never starve for wonders, but for want of wonders.”

History books will recall that Communism, that “evil empire” as Reagan so rightly called it, crumbled, as Ronald Reagan’s courageous policies achieved a seismic victory in the Cold War. Yet wonder of wonders, it all began on that first Christmas in his first term when the President of the United States invoked the name of Jesus Christ as the Prince of Peace long awaited.