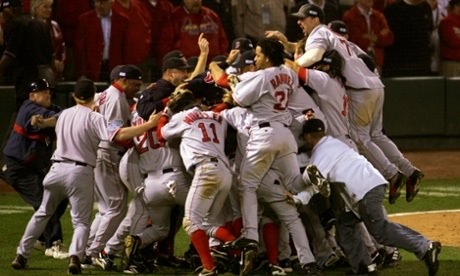 After all the city had been through this year it somehow seemed scripted to end like this. Back to Fenway. Back for one more cheer, one more sight of those beards, one more sound of a low and outside fastball meeting the locked and loaded wood of David Ortiz or watch the spirited Golden Glove Dustin Padroia make a signature, leaping double play, one more bow and tip of the hat from a John Lackey. And why not? The last time it happened the game was played entirely in September. The season had been cut short due to a war going on—World War I. It was 1918. For the seventh inning stretch in Boston, the crowd sang “The Star Spangled Banner.” It would be 1931 before it would be sung as our national anthemn. Harry Hooper and the rest of the Red Sox won that night, September 11, 1918, in Game Six of the World Series before the hometown folks in five-year-old Fenway Park. They had started out well with a winning pitcher—a future, fellow Hall-of-Famer to Harry Hooper: some kid named “Babe” Ruth. Ruth’s post season trade for cash to the Yankees would bring the legendary curse to Fenway—not broken until 2004. But there would be no Halloween Series this year against the Cardinals. No Game Seven. The City had seen enough of the real scary stuff. The folks didn’t need a Halloween game. That was not the way to write this one. What was needed was a loss in St. Louis and a quick return to Boston to sew this thing up. The Red Sox did that early on in the game with three runs in the third and three in the sixth. The brilliant John Lackey took care of the rest. Lackey descended the mound like a conquerer, pumped his fist in the air after another three up and three down pitching and Fenway roared its approval. The Cardinals, a first-class opponent, pitching the sizzling kid, Michael Wacha, mounted a one-run-come-back, but it was never going to happen for them. ‘Sox Manager John Farrell (whose cool demeanor in the dug-out was only surpassed by his amazing turn-around of this club) left Lackey in through the mid seventh. Lackey gave up one run on nine hits. He struck out five and walked one while throwing 105 pitches (76 strikes). Tazawa came in. Jon Farrell then sent in Koji Uehara to finish the game in the ninth. Three outs away from the first World Series title since that game in 1918, when Woodrow Wilson was President, was hanging over Fenway like a heavy fog on the Charles River. Uehara winds up and delivers a ball that John Jay can only manage to pop up to Gomes in left. Daniel Descalso repeats the scene—out number two with a left-field fly. It is Koji Uehara against Matt Carpenter, potentially, for the Series—for the firemen, for Boston’s finest, for the MIT police, for the families of the Boston Marathon bombing who lost loved ones, and for the blessed and courageous survivors who ambled in on crutches and new limbs to see this unforgettable civic history-in-the-making—and Fenway holds its breath. Will it be? Carpenter fouls away one. Another fast ball. He swings. Carpenter chips another foul. Now what? The stretch, the delivery…strike out.

An interminable stillness between a pitch and a swing, between a bright, beautiful day for another Boston Marathon and utter horror, death, and a manhunt—a September 11th, 1918 vintage snapshot of fans and a team long passed away with an era long forgotten as Doughboys march off to Flounder’s Field and red poppies color an otherwise faded, yellow photograph—and the crowd rises in slow motion. The swing…

“Strike!” The dugout collapses as Fenway erupts. It is done.

The 2013 Cardinals were a solid NL representative. The Red Sox were more. They were writing history for a cause. It is hard for even the best and brightest to stop that.

Thus, last night, the marathon was run all the home.