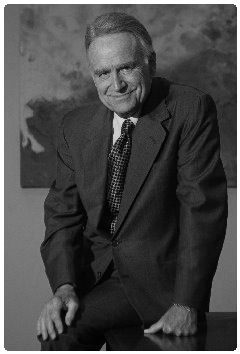 From the Radio Bible Study Hour to Changed Lives; against the turbulent backdrop of Woodstock, political assassinations, ‘God is dead’ movements, campus protests, and Watergate, his familiar voice and his image on Sunday nights across America became the soundtrack and video for collective generations. He was a minister in the Presbyterian Church in America. Yet most in his vast television audience would never know that fact. He wanted it that way. He was an evangelist who aimed his message at those who were in churches, but who were without Christ. He knew that demographic very well. Ben Haden had been like them until Jesus Christ had given him a changed life. After that sacred encounter with Christ everything else changed. For those of us who heard this evangelist and pastor—and especially for those of us who truly knew the man—we would be changed as well.

The Reverend Ben Haden—he would prefer I drop the title, but I will show honor unto whom honor is due, and Ben will have to put up with me—began his ‘conversations’ with his unforgettable signature line: ‘Let’s talk about it.’ Thus, the millions who tuned in to hear—and see—this remarkable and unique minister would, then, experience this man on fire with the Truth he had encountered in his own life and which he seemed to be presenting, like a skilled trial barrister before a jury (his congregation used to tease him that he wrote his sermon points on his fingernails, which he seemed to inspect as he paused, dramatically, to deliver his next powerful plea). Indeed, Ben had been a lawyer. And, yes, Ben was on fire with the love and Person of Jesus Christ who had changed his own life in 1954 when he went from being a CIA agent to a seminarian. Ben Haden lived for Jesus Christ and he gave his life to the ministry so that others would know the joy and peace that he had been given. What his television audience could not know was that Ben Haden was truly a gifted and caring pastor. I know. From the time I was called to follow him as Senior Pastor of our beloved First Presbyterian Church of Chattanooga, he was a pastor to me and my family. Indeed, over the last several months, since the leaders of the Seminary felt that I should step aside from my duties because of an illness, Ben telephoned me regularly to talk, to laugh (what an uproarious laugh the man had! It came from a soul set free), and to pray, often unto tears. Ben called me or my wife, Mae, about every month and he increased the frequency of his calls to twice per month when he felt I needed more prayer! When I heard that Ben was ill, I called him. That was about four weeks ago. I prayed for him over the telephone. Before I could let him go, Ben prayed what would be a final prayer for me. And I am only one of so many. I have been told stories of Ben “being there” for families and individuals in extraordinary moments of joy and sorrow. He was a veritable icon of compassion and love in the city he came to call home. To say that he will be missed will be to say that Chattanooga would miss the Tennessee River or miss Lookout Mountain. Ben Haden became a pastor to so many in the city that he must be remembered beyond a television evangelist and be recalled as a loving, Christian “father in the Lord” of the city where he labored in the Gospel for over four decades of his life. He was one with the city, a part of the landscape of souls in that beautiful place that sits in the palm of the hills and mountains.

Thus, while so many shall recall my dear friend as one of the most effective and faithful communicators and evangelists in an age of mass communication and the emergence of a number of notable communicators, for those who really knew him, he will be remembered as a humble and extraordinary pastor, who was faithful to Christ, his family, his call, and his flock to the day his Savior called him home.

“And I heard a voice from heaven saying, ‘Write this: Blessed are the dead who die in the Lord from now on.’ ‘Blessed indeed,’ says the Spirit, ‘that they may rest from their labors, for their deeds follow them’” (Revelation 14:13 ESV)!