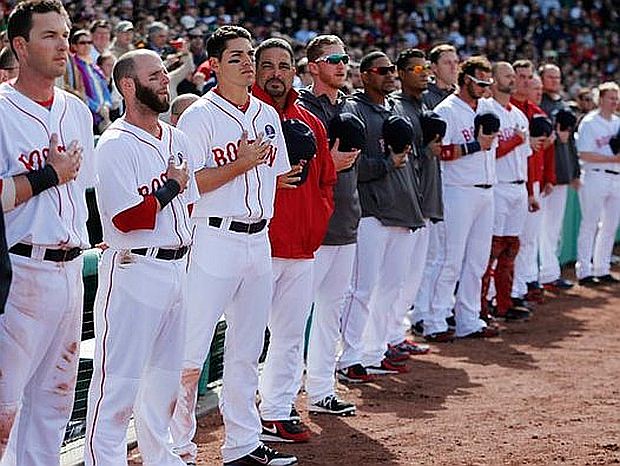 It was enough to choke up even the hardest core Yankee fan. When the Boston Red Sox fans, players and coaches, police, government officials, marching bands, military, and more American flags flying since George Bush stood on top of the rubble of the Word Trade Center with a megaphone, gathered on April 20th at legendary Fenway Park, the spirits of Ted Williams and Carl Yastrzemski must have been there too. It was a grand American moment. The most heinous attack on our soil since 9/11, including a manhunt and eventual capture of the remaining suspect, unfolded on live television across America with realigned intelligence and law enforcement officials doing what they were supposed to do: avoiding turf battles, working together, bringing ‘im in alive. They did. And they did it flawlessly. Well done. We are all Boston fans these days. And the Royals — I am a KC fan by the way — played pretty good ball, but it just was foreordained. The Sox won. America won. And the Boston and Federal officials who are there to protect us, did their job and got the applause that is overdue. It was an unforgettable celebration. I got chills watching and listening to the crowd singing the national anthem at Fenway. That is America.

But I am concerned that we will somehow think that this is over. We might be hesitant to acknowledge the hard reality: this was but one battle in a continuing war — an asymmetrical war with multi-fronts and no fronts — that will somehow go away if we begin to use politically correct language about Islamic fundamentalists.

Chechnya was not a country known to most Americans before this last week. Now we understand that this former Soviet state is a veritable nest of radical Islamic terrorist organizations. All of this should alert us to the real shift of radical Islamic threats from the Middle East to West Africa to Euro-Asia. The European Muslims have been a particular source of trouble but now are arriving on the shores of America for war as Cal Thomas predicted on 22 March 2013. Thomas interviewed Lars Hedegaard, an expert on radical European Islamic groups, who was the target of an assassination attempt. Hedegaard told Thomas,

“The concept of Jihad is really not war in our sense of the word,” explained Hedegaard.

“It’s not two armies opposing each other on the battlefield. Jihad is an instrumentarium of hundreds of different things you can do to further the cause.” [Muslims] “know how to wage war because they’ve been at it for 1,400 years. I would say Muhammad as a strategist is unsurpassed. … He has come up with a war-faring system that does not depend on a state. The warfare can even include factions that disagree with each other, such as Sunnis and Shia. …”

The Cold War is instructive at this point. Vietnam was not a war per se. It was one massive front in a larger war that stretched from the conclusion of WWII to the fall of the Berlin Wall. Ronald Reagan and Margaret Thatcher understood this. Others dismissed it. Dr. Paul Kengor rightly called those who were fooled by the Soviets during that time “Dupes” in his fine book by the same name. We can’t afford dupes today in the on-going war against a vicious enemy bent on world domination through destruction of the great democracies of the earth. It is good to remember that as we vote about gun control and immigration. This debate is not just about stricter background checks at gun shows and concern over illegal Hispanics cutting your neighbor’s lawn. It is now about protecting ourselves against Islamic war-fighters on our shores and in our universities. It is about the fact that we can tell the world we are leaving Afghanistan, but that does not make the bad guys go away. In fact, it may do just the opposite.

The gathering at Fenway was great. But this war is entering a new and more sinister phase. It’s time to gather as one nation under God and plead for His mercy and cry out for His Fatherly protection and destruction of evil. We’ve had our cheers in the stands of Fenway. It’s time for tear-stained pews at your church or synagogue this coming Sabbath.

There was a saying in Vietnam that is appropriate today for nations and people: “Stay alert — stay alive.” So let’s play ball.