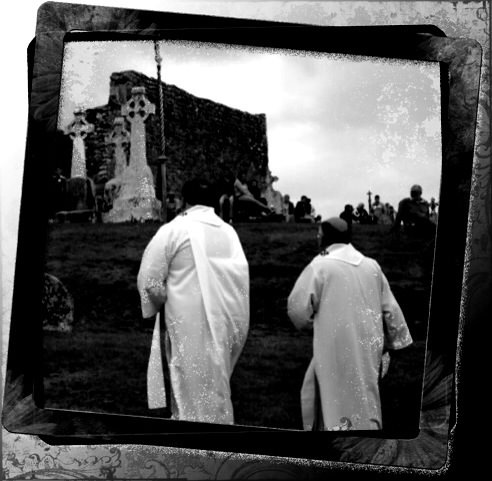 The resurrection of Jesus Christ never shines so brightly as when it is placed in the forefront of death and darkness. Then, this doctrine is like a sparkling diamond placed in front of the backdrop of black velvet.

I will never forget, as a boy, the site of an Easter sunrise service by one of the churches in our community. Their tradition was to process from the sanctuary of the little white clapboard church across the road and into the church cemetery. Led by a child holding a processional cross and followed by the black robed minister with a pure while surplice over his robe, and a long flowing, stole, flapping in a chilly, Easter morning dark breeze, and reading resurrection passages from the New Testament, a long train of choristers in white cassocks completed the battalion of believers. They processed past Misty’s grave, a school friend who died in a car accident as a little girl. They marched by the grave of Mr. Streep who was the local school custodian and who lived to be a very old man—of sixty—old to me then. I noticed many graves with MILTON written on the tombstone and felt as if I were looking upon my own grave. Aunt Eva and I moved along on that brief Easter pilgrimage with the humbled and small congregation (one of them was my teacher, but Mrs. Atkinson seemed less authoritative and more solemnly small and even rather human that morning) that followed the child with the big wooden cruciform, the black robed minister and the white cassock choir into the cemetery. Live Oak trees, draped in wet, gray-green moss, with low-lying, thick limbs guarded the sacred ground like sturdy old sentinels, or maybe American Legion vets from WWI. The preacher broke the silence of the scene with another reading, from John. The heavy dew that anointed our sunrise service turned to a frigid, steady drizzle. I drew close to Aunt Eva. I was looking down to keep the rain out of my eyes. I spotted an ant bed—South Louisiana fire ants they were—that had made a bed on the grave of a child. It had to have been a child’s grave. The plot and mound were so small. “It must be a child’s grave,” I thought. “Did I know the child?” As the drizzle turned to large drops of rain, the water pelleted off of the tombstone of that particular plot and ricocheted to hit the ant-bed with unrelenting force. The red ants scurried as the Easter rain water decimated their brown nest on the child’s grave.

Distracted by the fire ants and growing sleepy as the minister read on, never pausing from the rain, defiant as he spoke, I drew closer to Aunt Eva, who whispered, “I feel sorry for the minister in this weather.” Then she continued without a pause, “My hair will be a mess, but I won’t be the only one. My goodness, look at Ethel’s hair.” Suddenly, I was brought back to the reality of the sunrise service in the graveyard. The choir began to sing:

“I heard an old, old story
How a Savior came from glory,
How He gave His life on Calvary
To save a wretch like me;
I heard about His groaning,
Of His precious blood’s atoning,
Then I repented of my sins
And won the victory.”

Then we all sang.

“O victory in Jesus,
My Savior, forever.
He sought me and bought me
With His redeeming blood;
He loved me ere I knew Him
And all my love is due Him,
He plunged me to victory,
Beneath the cleansing flood.”

I looked at the faces in the choir and in the congregation all around me—maybe twenty or so—plumbers, turnip farmers, policemen, a feed store owner, housewives, and school teachers. Some sang with their eyes closed and seemed to be holding back their tears. Others seem to look up to the darkened Easter sunrise sky and sing as if looking for a sign from heaven. Some smiled. Some smiled and cried at the same time, which, I recall, confused me, but didn’t frighten me at all. The ant bed was nearly washed away by the time we stopped singing.

In the grave yard, in my annual Easter white jacket from Sears and Roebuck, and a new bow tie, and girls with new floral dresses, and boys with new ties or at least new shirts, well pressed, we stood there: believers in the resurrection, in the graveyard, alongside choristers in their soaked cassocks clinging to their bodies, and all of us clinging to the truth we had just sung. And then I looked for where the fire ants were. They were nowhere to be found. Their brown bed fell across the grave as the tombstone stood triumphant.

“Alright everyone!” The minister raised his voice. “Out of the rain and back to fellowship hall for coffee and donuts.” It was a benediction of sorts. Life was stronger than death. Hope was more enduring than sorrow. Donuts for the living.

“My hair is going to be a mess for church. Mike, straighten your tie, Son.” Aunt Eva’s exact words or words very much like them were repeated in a litany of whispers all through the little band of believers. As we moved through the fence gate, and crossed the road, the volume went from whispers to normal tones. The women bent down to their children to give their motherly instructions and murmured to each other about their hair, as they held shiny black purses over their heads. Some men lit cigarettes, and some pulled a plug of tobacco out and stuffed it in the side of their mouths; one last chew before Sunday School. I raced another boy for the door and beat him to it. Once inside the fellowship hall, he pushed me away, and ran past me to the table where the donuts were.

Life went on. But I can never forget the white clad processional through the cemetery. I could never forget singing “Victory in Jesus” or the watching the ant bed that couldn’t withstand the Easter rain.