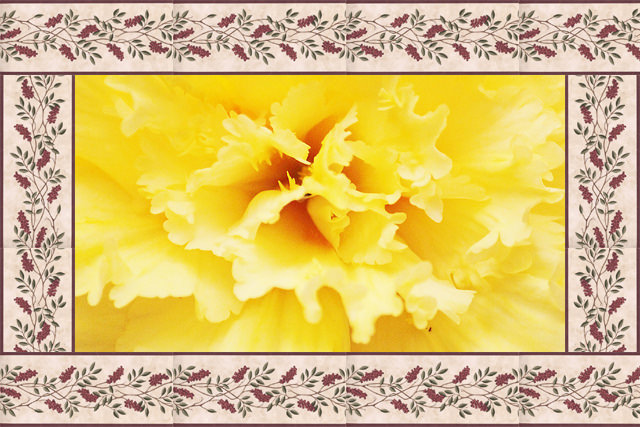 [pullquote]One generation will commend your works to another; they will tell of your mighty acts.” (Psalm 145.4 NIV)[/pullquote]

For a gardener, like myself, March is an in-between month. The dried, gray-brown stalks on the oak leaf hydrangea, left over from last autumn, stand at attention, like a proud, old war veteran in his outdated, ill-fitting military uniform. And like a little child standing by the white-whiskered old man, perhaps as one might see at a patriotic parade, the young King Alfred Daffodil shows off its bright yellow flowers.

The contrast of old and new is the motif for the March garden. The new has come, but the old is still here. Emily Dickinson said that “March is the month of expectation, The things we do not know” (XLVIII). Such is this in-between time. We remember, we sense the new, but it is not yet fully here. So much talk of future things in contemporary, best-seller, pop Christianity, is consumed, not just with “an expectation of things we do not know”, but a seeming certainty in things that God left intentionally unclear. March, though, is still tethered to last season, while yearning for the next. March, like a contented believer on a Sunday morning, seems to affirm simply: “Christ has died, Christ is risen, Christ will come again.” This seems to me to be a good March-like, in-between-time affirmation.

“Oh, give us pleasure in the flowers today;
And give us not to think so far away.” (A Prayer in Spring)

And so I will think of today, and tomorrow. March 23, 2013 is my son’s nineteenth birthday, so I will cherish and embrace what some call an awkward, in-between age and love him all the more. I hope I can be patient as he stretches deeper into spring and I into autumn.

Today I also spent a few sacred moments gazing on a plant that is undoubtedly meant for March. This bush, with long, strong, green branches, shoots out bright yellow, but small, flowers all over its stalk. Profuse, the flowers cluster and look as though they are bigger than they are. I gaze and not just glance at the yellow flowering bush. You see, this bush is special to me. It has been passed down to me from one generation to another and it has followed me all over America. It was my grandmother’s. She planted it, some time long ago, in the loamy soil of southeast Louisiana. I don’t know where she got it. But after she was buried, my Aunt Georgia (Aunt Eva’s sister) came out to the country where we lived (and my Grandmother lived next to us), and she went into the yard and picked out several plants. I can see her in my mind’s eye, even now, bending over and gathering cuttings in the cold, early spring when my Grandmother died. Aunt Georgia, famed for her “green thumb”, took the cuttings, pieces of her mother, and planted them in her yard in Baton Rouge. Years later, I was strolling arm-in-arm with Aunt Georgia in her picturesque back yard (”I’m telling you, her yard looks like something out of Southern Living,” folks would say) and she stopped, looked at a plant, and turned to me and said,

“Mike, take this cutting and plant it at your place in Kansas. Mama called it a ‘March rose’, but it is not a rose. But it has beautiful yellow flowers that come in March and last until frost. Let’s wrap it up in wet newspaper and you can carry it on the plane. Mike, I want you, and Mama would have wanted you, to plant it in your yard.”

I did. I planted it in our garden in our Kansas home. It grew. Somehow, the rich Kansas soil seemed just fine to this “March rose” (it is not, I repeat, a “rose,” but a bush with rose-like flowers). It grew and bushed out gloriously. When we went to Savannah to accept a call to plant another church, I took cuttings from my Grandmother’s March rose to replant it in Savannah. Again, this hardy, multi-generational, well-traveled plant did just fine. When we were called here, I took cuttings before we left to bring her March rose to yet another place. And so, now in North Carolina, it still grows, even wildly! I have to keep it trimmed or it will “take over” the space of neighboring, less ambitious plants. And so this morning as we celebrated my son’s birthday and I had only enough energy to rejoice in a season of prayer and thanksgiving, strolling about my yard in my bathrobe, I took in not only the sight, but the memories of the “March rose” bush. It has gone through at least three generations, five different garden spots in four different states, and yet it blooms. Not only does it bloom today in my North Carolina piedmont home, but I am sure, on this March day, it yet blooms on Signal Mountain, Tennessee, in Savannah, Georgia, in Overland Park, Kansas, in Baton Rouge, Louisiana, and, yes, way back on a country road, in a very poor place in southeast Louisiana, where my grandmother once planted it. My grandmother is in heaven, and so are Aunt Eva and Aunt Georgia, and the house has fallen down, but I feel sure the March rose surely blooms; through rotting, ancient cedar planks, it ever blooms.

And so I pray for the bloom of faith, which has been taken from one generation to another, sometimes seeming to fail in the contaminated soil of sin, my sin, to now be rooted and grounded in my son, my wife, our children… and in those I have ministered to at this place of service. I do not know if we will remain here or move. I am just trying to heal now. Yet I can be thankful that there has been a “”cutting” of faith planted—something from my life engrafted into the soil of other lives. Oh how I pray it takes root and grows, even healthier under a better gardener.

Pastoral ministry is the task of going about, as the Lord calls, and planting the cuttings of grace you have received; hopefully, leaving something that blooms in the in-between times of life until Christ comes again.

“One generation will commend your works to another; they will tell of your mighty acts.” (Psalm 145.4 NIV)

“Our Father, you are the Gardener of our souls. You are working faith and life in your plant. As we live in-between yesterday’s bloom and tomorrow’s new growth, help us to trust you. We trust you with our families, our friends, our church, and our very souls. And I thank you, Father, that through the resurrection of Jesus Christ, all seasons are seasons of your grace, seasons where new growth can break through dried, old, gray-brown stalks. We pray in Jesus’ name. Amen.”