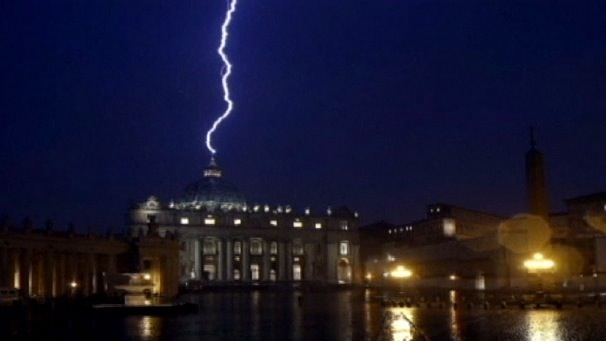 The picture on the opinion page of the Wall Street Journal, page A13, has a picture of lightning flashing over St. Peter’s Basilica from last Monday when Pope Benedict XVI announced that he would step down. The picture is worth 1000 words, or at least worth 800 words, the usual word count for a newspaper article. I want to add a few words of my own.

My words come from the perspective of a Presbyterian minister who has a great love for those in the Roman Catholic Church and holds immense respect for Pope Benedict XVI. The Council of Trent and key theological doctrines notwithstanding, Presbyterians and devout Roman Catholics do have some things in common: namely, our belief in the inerrant and the infallible word of the living God, the truths summarized in the Apostles Creed and Nicene Creed, the divinity of Jesus Christ, and a longer list of cardinal Biblical truths. I certainly have more in common with a devout RC than a liberal mainline Protestant in the West. There’s no reason for me to state the differences in this essay. My concern is to praise the labors of a great man who has done much good.

Benedict has turned out to be a pope that is not just the theological bulldog of Rome, which we were told to expect when he followed the more poetic John Paul II, but he emerged as quite an extraordinarily touching and warm pastor to his flock, and an able emissary to the rest of Christianity. Indeed, I have admired him for his right stance on the sanctity of life, the sanctity of marriage, and the prophetic cry to Europe to return to her roots in the teaching of St. Paul which laid the very foundations of Western civilization on which we have advanced for two millennia. He has accurately pinpointed secular humanism as an enemy of the Church. He has been, from this Presbyterian’s viewpoint, a very good Pope not only for those friends of mine in the Roman Church, but he has been a good Bishop of Rome that has encouraged all Christians. I am thankful for him. I also admire any man when he comes to the place where he says, “I’ve done my part. It’s time to hand off the baton to someone else. The office is greater than anyone one man.” And so I will remember Pope Benedict XVI, in my own life, as one who did much good for the cause of good in the world.

My prayer for his successor is this:

That you will continue to build on the ministry of Benedict in calling Europe and America back to its biblical roots;

That you will support and labor cooperative with the Reformed churches in supporting the work of the Holy Spirit in the global South and the global East;

That you engage our Jewish friends who deny Christ, as well as Islam and other world religions, without ever compromising the claim that Jesus Christ is the Way, the Truth, and the Life and that there is no other way to eternal life but through Him. We can respect others, and especially pay the honor owed to our our devout Jewish brothers and sisters for their place in the sacred cord of redemption of the world, without denying the exclusivity of the Lord Jesus Christ;

That you use your pulpit to encourage righteousness in common grace around the world;

That you will hold strong to the teaching of the Word of God, which we have in common, that speaks to the image of God in every man, and to “cry aloud and spare not” that freedom comes from God and is not mediated through government; that he will courageously declare that such Statism is antithetical to Christianity and is a beastly power that cannot stand and will, to use the words of Ronald Reagan, end up on the ash heap of history;

That you will continue to respect and recognize the real theological differences that exist between the Reformed churches and the Roman Catholic church, but that you will also recognize that, increasingly, we have to stand together against the dehumanizing forces of “this present evil age” which, as is taught in Psalm 2, are conspiring together, under undeniable diabolical influence, to oppose God and His people. Without compromise, we must cooperate. There is so much good to do. There are so many fronts in the battle with the world, the flesh, and the devil. We must find organic unity in the ministry of the Holy Spirit and not be seduced into working with inevitable futility for an organizational unity, that pleases the world, but detracts from and depletes our energies from engaging the pressing onslaught of Hellish forces which threaten the common Faith.

I don’t believe that a Presbyterian will be invited to be part of the Conclave of Cardinals who will elect the next Pope. But if I had my choice, I would go with Cardinal Timothy Dolan. I say that not only because I am an American. No, let me take that back. I say that because I am an American — an American Christian — and I have seen and heard Cardinal Dolan stand for the very things that are so important and are at stake in the spiritual warfare that we are in. We believers here in America are seeing Satan going about as a roaring lion. Secular humanism and diabolical atheism are encroaching at an extraordinarily quickening pace in every single institution of our land. Cardinal Dolan spoke clearly and loudly when certain forces began to attack the image of God in man and when government attempted to deny the liberty that comes from God alone. I applauded him then and he inspired me to speak. I believe that his voice would be a prophetic and pastoral voice and a welcome voice in the world today.

We all remember just how important that voice is when we recall that Ronald Reagan, a Presbyterian, Margaret Thatcher, an Anglican, joined forces with Pope John Paul II, the Bishop of Rome, to lead a unified front against the oppressive Marxist-Leninist regime of the 20th century. That regime had taken millions of lives. If Reagan, Thatcher, and Pope John Paul II had not been unified and strategic in harmonizing their cries for freedom, millions more would have perished.

That is just how important this time is for all of us, what ever our religion. The succession of the Bishop of Rome affects all of us in today’s world. And I pray that God will bless us all with one whose heart is magnanimous, but whose conviction for those things that we hold in common is resolute. We need such a voice now more than ever.

What is then missing are the other voices to join in harmony with him. May God have mercy upon us and grant such leaders in this, our time. There are souls at stake and those souls are precious to God and must be precious to those of us called to shepherd them.