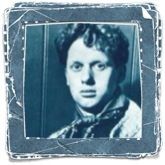 Dylan Thomas’ poetry must be read aloud. It is not intended to be muffled and read in the mind, but through the mouth. And so on this snowy night in North Carolina, I gather by the fire for the evening’s remaining moments and read the Welsh bard aloud to myself and to the falling snow outside of my window. And there is no better poem to speak unto a winter’s night than this collection of phrases, stumbling across the vales in the Swansea snow like a parson walking home from a late night visit on an aging member. A Winter’s Tale:

It is a winter’s tale
That the snow blind twilight ferries over the lakes
And floating fields from the farm in the cup of the vales,
Gliding windless through the hand folded flakes,
The pale breath of cattle at the stealthy sail,

And the stars falling cold,
And the smell of hay in the snow, and the far owl
Warning among the folds, and the frozen hold
Flocked with the sheep white smoke of the farm house cowl
In the river wended vales where the tale was told.

Once when the world turned old
On a star of faith pure as the drifting bread,
As the food and flames of the snow, a man unrolled
The scrolls of fire that burned in his heart and head,
Torn and alone in a farm house in a fold

Of fields. And burning then
In his firelit island ringed by the winged snow
And the dung hills white as wool and the hen
Roosts sleeping chill till the flame of the cock crow
Combs through the mantled yards and the morning men

Stumble out with their spades,
The cattle stirring, the mousing cat stepping shy,
The puffed birds hopping and hunting, the milkmaids
Gentle in their clogs over the fallen sky,
And all the woken farm at its white trades,

He knelt, he wept, he prayed,
By the spit and the black pot in the log bright light
And the cup and the cut bread in the dancing shade,
In the muffled house, in the quick of night,
At the point of love, forsaken and afraid.

He knelt on the cold stones,
He wept form the crest of grief, he prayed to the veiled sky
May his hunger go howling on bare white bones
Past the statues of the stables and the sky roofed sties
And the duck pond glass and the blinding byres alone

Into the home of prayers
And fires where he should prowl down the cloud
Of his snow blind love and rush in the white lairs.
His naked need struck him howling and bowed
Though no sound flowed down the hand folded air

But only the wind strung
Hunger of birds in the fields of the bread of water, tossed
In high corn and the harvest melting on their tongues.
And his nameless need bound him burning and lost
When cold as snow he should run the wended vales among

The rivers mouthed in night,
And drown in the drifts of his need, and lie curled caught
In the always desiring centre of the white
Inhuman cradle and the bride bed forever sought
By the believer lost and the hurled outcast of light.

Deliver him, he cried,
By losing him all in love, and cast his need
Alone and naked in the engulfing bride,
Never to flourish in the fields of the white seed
Or flower under the time dying flesh astride.

Listen. The minstrels sing
In the departed villages. The nightingale,
Dust in the buried wood, flies on the grains of her wings
And spells on the winds of the dead his winter’s tale.
The voice of the dust of water from the withered spring

Is telling. The wizened
Stream with bells and baying water bounds. The dew rings
On the gristed leaves and the long gone glistening
Parish of snow. The carved mouths in the rock are wind swept strings.
Time sings through the intricately dead snow drop. Listen.

It was a hand or sound
In the long ago land that glided the dark door wide
And there outside on the bread of the ground
A she bird rose and rayed like a burning bride.
A she bird dawned, and her breast with snow and scarlet downed.

Look. And the dancers move
On the departed, snow bushed green, wanton in moon light
As a dust of pigeons. Exulting, the grave hooved
Horses, centaur dead, turn and tread the drenched white
Paddocks in the farms of birds. The dead oak walks for love.

The carved limbs in the rock
Leap, as to trumpets. Calligraphy of the old
Leaves is dancing. Lines of age on the stones weave in a flock.
And the harp shaped voice of the water’s dust plucks in a fold
Of fields. For love, the long ago she bird rises. Look.

And the wild wings were raised
Above her folded head, and the soft feathered voice
Was flying through the house as though the she bird praised
And all the elements of the slow fall rejoiced
That a man knelt alone in the cup of the vales,

In the mantle and calm,
By the spit and the black pot in the log bright light.
And the sky of birds in the plumed voice charmed
Him up and he ran like a wind after the kindling flight
Past the blind barns and byres of the windless farm.

In the poles of the year
When black birds died like priests in the cloaked hedge row
And over the cloth of counties the far hills rode near,
Under the one leaved trees ran a scarecrow of snow
And fast through the drifts of the thickets antlered like deer,

Rags and prayers down the knee-
Deep hillocks and loud on the numbed lakes,
All night lost and long wading in the wake of the she-
Bird through the times and lands and tribes of the slow flakes.
Listen and look where she sails the goose plucked sea,

The sky, the bird, the bride,
The cloud, the need, the planted stars, the joy beyond
The fields of seed and the time dying flesh astride,
The heavens, the heaven, the grave, the burning font.
In the far ago land the door of his death glided wide,

And the bird descended.
On a bread white hill over the cupped farm
And the lakes and floating fields and the river wended
Vales where he prayed to come to the last harm
And the home of prayers and fires, the tale ended.

The dancing perishes
On the white, no longer growing green, and, minstrel dead,
The singing breaks in the snow shoed villages of wishes
That once cut the figures of birds on the deep bread
And over the glazed lakes skated the shapes of fishes

Flying. The rite is shorn
Of nightingale and centaur dead horse. The springs wither
Back. Lines of age sleep on the stones till trumpeting dawn.
Exultation lies down. Time buries the spring weather
That belled and bounded with the fossil and the dew reborn.

For the bird lay bedded
In a choir of wings, as though she slept or died,
And the wings glided wide and he was hymned and wedded,
And through the thighs of the engulfing bride,
The woman breasted and the heaven headed

Bird, he was brought low,
Burning in the bride bed of love, in the whirl-
Pool at the wanting centre, in the folds
Of paradise, in the spun bud of the world.
And she rose with him flowering in her melting snow.