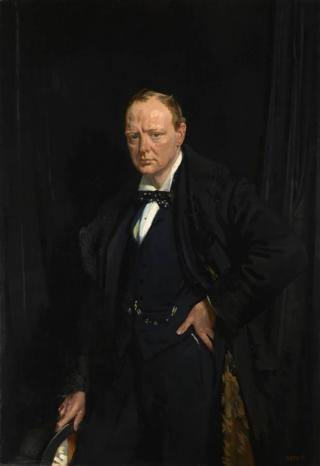 Veteran’s Day and the release of the last installment of the late William Manchester‘s sweeping epic-multivolume-series on Sir Winston Churchill has caused me to reflect on the old Lion of Britain. The last of Manchester’s magnus opus was an unfinished manuscript which was, thankfully, brought together by co-author Paul Reid. The Last Lion: Winston Spencer Churchill, Defender of the Realm, 1942-1965 is an appropriate book to begin reading in this post-election season. It also leads us to think about the honor and the legacy of a great veteran on this weekend.

I was given a link to the video from YouTube of the funeral of this great man. The video is one of the greatest videos I’ve ever seen – and heard. Look at the eyes of the public as they mourn. Listen to the strains of “I Vow to Thee, My Country.” Spell-binding. It reminds one of Reagan’s funeral or of JFK’s funeral. Unforgettable. My friend gave me the link to the video to commemorate Veterans Day. And I believe that is most appropriate. Although this not about an American veteran, Sir Winston Churchill was, as you know, one of the greatest friends America has ever had. President Obama may have returned the sculpture that was given to our nation by Prime Minister Tony Blair after 9/11, but many Americans and particularly American veterans will never deny the honor and gratitude owed to one who stood with us in a dark hour of world history and one who fought for an American-Anglo alliance to defy Fascism, Socialism, and Communism—and all Statism in any of its several manifestations—in the world. He was a veteran, statesman, author, artist, poet, journalist, and most of all, what we (America and Great Britain) need now, a leader whose impulses and decisions were born out of a principled conviction and not a political expediency. He was not without fault. Visions of his Christian faith were often blurred by his vices. But his legacy as a statesman and leader and defender of liberty has been sculpted in the perspective of time and out of the greatness that he inspired in others.

You will not regret taking the time to watch and listen.

Added bonus: The anthem which forms the soundtrack to this video is, “I Vow to Thee.” This is often an alternative national anthem for the United Kingdom after “God Save the Queen.” The anthem was written in 1908 by a British diplomat and later set to music by Gustav Holtz with the adaptation of his piece, Jupiter, from the Planets. What is interesting about the anthem is that the first part of the anthem speaks of the United Kingdom. The last verse speaks of the Kingdom that is overtaking all of the other kingdoms of the earth: the Kingdom of heaven.

I heard my country calling, away across the sea,
Across the waste of waters she calls and calls to me.
Her sword is girded at her side, her helmet on her head,
And round her feet are lying the dying and the dead.
I hear the noise of battle, the thunder of her guns,
I haste to thee my mother, a son among thy sons.

And there’s another country, I’ve heard of long ago,
Most dear to them that love her, most great to them that know;
We may not count her armies, we may not see her King;
Her fortress is a faithful heart, her pride is suffering;
And soul by soul and silently her shining bounds increase,
And her ways are ways of gentleness, and all her paths are peace.”