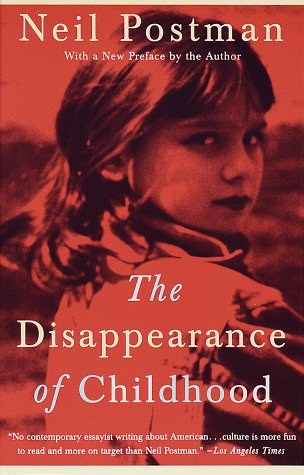 Childhood is a divinely protected season of life. That is what Jesus declared when He said,

“…But whoever causes one of these little ones who believe in me to sin, it would be better for him to have a great millstone fastened around his neck and to be drowned in the depth of the sea” (Mark 9:42, ESV; see also Matthew 18:6 and Luke 17:2).

The Evil One will be thrown into the lake of fire, drowned in the depth of the sea of eternal flames, because of his direct attack on children. Satan masquerades in our culture as one who would help children, but we must be careful. There is not a devil under every bush, but there is a devil behind every attempt to kidnap childhood.

I used to require all of my assistant pastors to read Neil Postman‘s The Disappearance of Childhood.[1][2] The late professor of communications at the University of New York used common grace, for he was not a believer,[3] to see that childhood was, in essence, created by Jesus Christ with these very words, reclaimed, I would say, from the Fall, and subjected to re-entry into darkness when a man or woman or a community rejects the light they were given in God’s Word. Thus, Postman felt that while the Reformation, with its emphasis upon the Word, reclaimed childhood, postmodernity and the new “image based” society seeks to steal it. The picture of the little cover photograph of a little girl, she looks to be eleven or so, with twenty-year-old make up, is a shocking image in itself pointing to the professor’s thesis. These words do not do the book justice. Read it for yourself. Yet it is enough to say that our society, by rejecting God and His Word, by rejecting the commandment of God to have no other images, for images provoke the idol factory of the mind and the idols must be then be fed. The image gods are fed with immodesty at the first and then, finally, by utter moral failure and corruption until finally the child is consumed.

Christ‘s words are so focused on children because He seeks to love them. They are also the model of what our faith should be. For to such belongs the Kingdom of God.[4]

Society is kidnapping our children through ungodly education, careless and often intentional withholding of the truth, and immoral imagery. This is being done not only by the world, but, shockingly, sadly, and contemptibly, by those who claim to be followers of Christ.

The educational systems of this present age are beast-like Apocryphal forces that are ravaging and devouring the sweet souls of our children by teaching them that there is no God. While our public education system, and so many private educational institutions, claim distance from any singular moral program, they are, in fact, embracing a morality of their own making, or at least of the devil’s making. One cannot teach from an ethical or moral vacuum. Either one teaches there is a God or does not. Darwinism, that blight on the pages of 19th century English history[5] and the perfect companion to the Socialism of John Dewey,[6] the “father of American public education,”[7] that expresses itself in fanciful but godless theories of cosmology, and interpretation of history and life from a naturalistic ground, making no room at all for a supernaturalism, not to even mention Judeo-Christianity, steals the heart of the child from where their heart, by virtue of the sensus divinitatis, as Calvin called it (the sense of the divine inside of all of us as Paul explains in Romans 1:19-20). This is, as Robert L. Reymond[8] has put it, one of the greatest abominations in our time. Others, even agnostics, do not disagree.[9]

Yet there are more culpable groups that just institutions operating from faulty frameworks. There are parents themselves, and other family members, some Christian and some not, who are seduced by the idolatrous ideas of this world, who must be questioned at this point. For while one is actively pursuing a program of atheism with our children the other is neglectful in teaching the things of God. Timothy was to continue in the things he had heard from his mother and grandmother. He had a heritage of faith to call upon in difficult times. Today, too many families have neglected the family altar, the daily ministry of the Word and Prayer in their homes. More than this, they have done so because of the busy-ness of “this present evil age,” which demands, like the Old Testament pagan deity, Moloch, to be fed by their very children.

“And thou shalt not let any of thy seed pass through the fire to Moloch (Leviticus 18:21 KJV).”

Yet too many of God’s own people present their little ones to the hidden powers of the darkness, to this same devouring demon, by neglecting the teaching of the Word of God, of singing hymns, and Psalms and spiritual songs, of making their home a church, where the little ones will grow in Christ. I do not even endict the ungodly world on this for they know not God at all. Woe to those who sacrifice their children through neglect of the things of God.

We are called to educate, to teach, train, and rear up our children with the Word of God and in the community of God’s people until they ask for themselves, “What does this mean?” and you tell the story of God’s deliverance in your own life through Jesus Christ (Deuteronomy 6). Then your teaching will be coupled with your life and with the God ordained progress of faith under the Covenant of Grace and that child will call upon the Lord. This is the education that must be given. This is the education which must not be withheld. This is to help our children to come to know Jesus Christ as Lord and to fulfill the command of the Gospel in this area. Oh, that some reading this will stop and take heed. Oh that some will draw back from the quenching fires of Moloch and run with their little ones in their arms to the loving Savior who brings life abundant and life eternal.

Judaism stood apart from the pagan nations in that they were to be people of the word, not making images of God. God Himself would give us the image we needed in the Incarnation of Himself in Jesus Christ. But we were to think thoughts after God not make images of Him. And so our faith is a word-centered faith, not a religion of images. This is not to say that to think thoughts after God is to avoid painting or sculpture. To the contrary, the Bible has produced those whose art has sought to express the nobility of God and His Word.[10][11] Yet when the Word is ejected and image is exalted as a primary way of communication there is, as Postman reminded us, a formidable danger. The flesh desires the image over the Word. We think that we can control the image. Yet it is a power that if benign would surely not have been so singularly dealt with in the Bible. The image eats away at the Word and once the Scriptural tether is finally severed, we create a god in our own image. We can also unleash the carnal powers of the flesh. That is the danger we face in our day, not only for ourselves, but also most heinously to God, to our little ones.

Children are not ready to hear or see the expressions of sensuality at a young age.[12][13] Their hearts are not formed yet in the ethics of God. Their minds are not settled on the Gospel truths of Christ. Their longings are not even recognized, much less [14]met in Him first, before they are subjected to the immorality of this lustful age. The media has brought wondrous things to our lives, but there has been a cost. The cost can be, if we are not diligent, to allow the merchants of Madison Avenue to sexualize our children’s minds. Nothing could be more reprehensible than a child molester. We cringe to think of it. Yet too many of us will allow our little ones to see the most ungodly images and, in reality, become party to the devilish scheme of destroying the souls of our children. Make not mistake. Pornography is not the only threat to our children. The daily dose of merchandizing by sensuality has its effects on our children.[15] They are being led from us by these images and their little hearts and minds are taken from the refuge that is in Jesus.

There is no prevention to such child stealing like that of the Christian home and the community of saints called the Church.[16] It is there that we must guard our children from the monsters who would steal them. Moreover, we must not keep them from Christ. We must bring our children to the Lord[17][18] and let Moloch and his demons be damned by the Spirit of Christ who destroys all who seek to harm His children.

[7] Egan, Kieran. Getting it wrong from the beginning: Our progressivist inheritance from Herbert Spencer, John Dewey, and Jean Piaget. Yale Univ Pr, 2004.

[8] In a private conversation.

[9] Postman, Neil. The end of education: Redefining the value of school. Vintage books, 1996.

[10] Wolterstorff, Nicholas. Art in action: Toward a Christian aesthetic. Wm. B. Eerdmans Publishing, 1980.

[13] Hymowitz, Kay S. Ready or not: why treating children as small adults endangers their future–and ours. Free Pr, 1999.

[14] Postman, Neil. Technopoly: The surrender of culture to technology. Vintage, 1993.