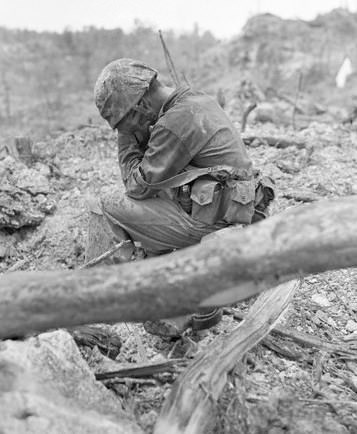 I am arriving at Fort Jackson this evening. Tomorrow morning I will join with the cadre at the United States Army Chaplain Center and School to give support and instruction for mid-career chaplains. There’s something that I want to say; something that is on my heart; something that I need to unburden myself of, and it is this—you minister to people best when you minister out of Christ’s compassion for the broken people God has placed in your life. Because all truth is God’s truth, this applies in other contexts, but its incarnational glory is fully displayed in the life and ministry of Christ our Lord. As a chaplain we minister to all. As a believer and a preacher of the Gospel I minister out of the centering point of my life and my vocation—my faith in Jesus Christ. Thus I write.

In the ninth chapter of the Gospel according to St. Matthew, our Lord and Savior Jesus Christ is revealed as the great God of profound compassion. As one reads through the chapter that leads to the climactic moment when His great heart is fully revealed as a broken heart for the multitudes, Matthew shows how He had ministered. In the Lord’s compassion He had healed the sick, forgiven reprobates, and raised the dead. He moved through the layers of hurting humanity with healing in His hands. Jesus Christ ministered to everyone who needed ministry. He went throughout all the villages feeling every disease. There was inevitability about it all. “He will go on healing everyone,” it seems. Thus it was recorded in Matthew 3:

“And he went throughout all Galilee, teaching in their synagogues and proclaiming the gospel of the kingdom and healing every disease and every affliction among the people. So his fame spread throughout all Syria, and they brought him all the sick, those afflicted with various diseases and pains, those oppressed by demons, epileptics, and paralytics, and he healed them” (vv. 23-24).

So in chapter four:

“And Jesus went throughout all the cities and villages, teaching in their synagogues and proclaiming the gospel of the kingdom and healing every disease and every affliction” (Matthew 9:35 ESV).

And yet the Son of Man came to a point in Matthew’s account that He looked up on the multitude who were like sheep without a shepherd; scattered (not a “dispersed” kind of scattered but the Greek means a “downcast” and “ravaged” understanding of scattered) and it was then that Matthew—a sinful tax collector converted by the compassion of Jesus Christ and who, in this ninth chapter, placed himself in his own writing like a Rembrandt in his own painting—reveals the love of our Savior. Matthew tells us that he had compassion on the multitude for they were like sheep without a shepherd. The Greek expression for compassion[1] is a word that speaks of the very intestines of our Savior – the deep inner organs that were wracked with pain – the pain of a compassion that no one can ever comprehend. It is the compassion of the Creator for his own creation. It is the compassion of a father for his children but in an infinitely more intimate relationship of love than you or I could ever fathom. Out of this deep-seated compassion of our Lord Jesus Christ comes His command. The command of Christ is that His disciples should pray. And for what or whom should we pray? What should be our response to this compassion of Jesus for the multitude they are gathered in Israel?

“Then he said to his disciples, ‘The harvest is plentiful, but the laborers are few; therefore pray earnestly to the Lord of the harvest to send out laborers into his harvest’” (Matthew 9.37–38 ESV).

Christ therefore looks confidently over the landscape of a broken, fallen humanity and sees redemption on its way. Yet the redemption will come to the multitudes through His disciples. And those disciples will develop out of prayer for laborers for His harvest. You have heard of preachers who were called by God to preach who later learned of, say, a great-grandfather who prayed each day that God would bless His progeny with a minister of the Gospel. That example, a very common one, is a direct response to this passage.

But here’s the thing that I want to say: the multitudes that Jesus saw were the objects of his divine affection; the objects of his compassion; the aim of his redeeming purposes. And yet, Jesus, according to John 17, would love those who were not yet even born.[2] And he would do so through the testimony of his disciples. So Jesus Christ had compassion on that multitude on that day—those very people who were before him in that text. Matthew tells us this. But John lets us that His compassion extends beyond that moment and those people to generations yet unborn and to disciples yet unconverted much less to those called to answer His call to pray and ministry. Jesus Christ’s compassion would be extended to others through the very disciples who receive that compassion themselves. Therefore, Jesus cared for that mass of hurting sheep Himself. His prayer for shepherd-laborers to go into the plentiful harvest is a prayer for you and me. It is a prayer that we should reach the multitudes in our day, people He made; souls He has elected unto salvation. Yet we can only reach those who are before us—we aim our message at one, or two, or three, the people we know who need the Lord. Yet if I reach out to those who are on my heart and you reach out to those who were on yours and the other man will reach out to the people were on his heart, then we shall reach many together. This is His plan. This is our calling.

Well there is my concern from the Scriptures and here’s my concern the chaplains I’ll be teaching this week.

Minister to the people God has placed on your heart. There are probably only a few, but because all of us are in the same condition, if you minister to that one person on your heart, you will minister to many who others who are in the same condition. I give an example from my life. This example explains, also, why I am a United States Army Reserve chaplain. It is also the reason, after much traveling and preaching and teaching and meetings and budgets and counseling in the civilian ministry world, I would take time away, still keeping in contact with that ministry, and seek to serve God and Country in the United States Army. It is this very reason: I have a broken heart about two people I once knew. I knew these two people very well. One of them I wish that I would’ve known better. But that is part of the necessary beckoning, the acute aching, the deep passion, and the God-given desire to reach them—a particular people close to me and others like them close to you—and bridge the distance, enters the multitude, and bring the redemptive relief of healing to their souls through Jesus. Your compassion for those few is His compassion to the multitudes He will reach through you (and others like you). There are two people who I want to minister to as a chaplain. First of all, I want to minister to a young 17-year-old boy who signed up for the Navy not because he sought adventure but because he was running from bewilderment. The Navy gave him an education. The Navy gave him personal resources that would last for the rest of his life. What the Navy didn’t give him was a chaplain—or at least a chaplain who was there to talk to him about that confusion. The confusion brought the boy farther away from the things of God, farther from home, and closer to the brink of self-destruction. I know that young, confused, prodigal sailor-boy. I was that young man. And I know that there are so many others just like him. I can have compassion on him, the compassion of Jesus Christ, because I know the brokenness of his life and the reality of Christ’s touch that healed the boy I knew. The other person that I minister to is an aging officer with the burden of the world on his shoulders. That burden has pushed him down so far that he has come to believe the lie that the only way to bear the burden is to bury it. The man on my heart buried it in alcohol and it ended in shame and an early death. This officer was someone who I knew for only a while. I minister to that man today for that man was my father. Every time I put on the uniform of the United States Army and look in the mirror and see the cross that I wear, see the rank that has been conferred upon me, I think of those two people. The cross and the rank is for them. I not only think of them, my heart breaks for them. I believe that is the compassion of Jesus Christ moving through my life to reach two people out of the multitude. Yet, I know, those two people are represented in thousands of other enlisted and commissioned soldiers. They are there. I have seen them. I thank God that there are also so many I will never meet, but the Word will reach them. I preach for two. The Word is multiplied like loaves and fishes to thousands.

Who are the people from the multitude that God has placed in your life? Name them. Those are the souls—precious souls—for whom Christ has compassion. Minister to those few in your heart and you’ll actually minister to many. Minister Christ personally and you will minister Him pastorally. And Christ’s command will become an answered prayer.

[1] splagchnizomai; “Key Dictionary of the Greek New Testament: Based upon the Strong’s Greek Dictionary, Updated for the Critical Greek Text, n.p.