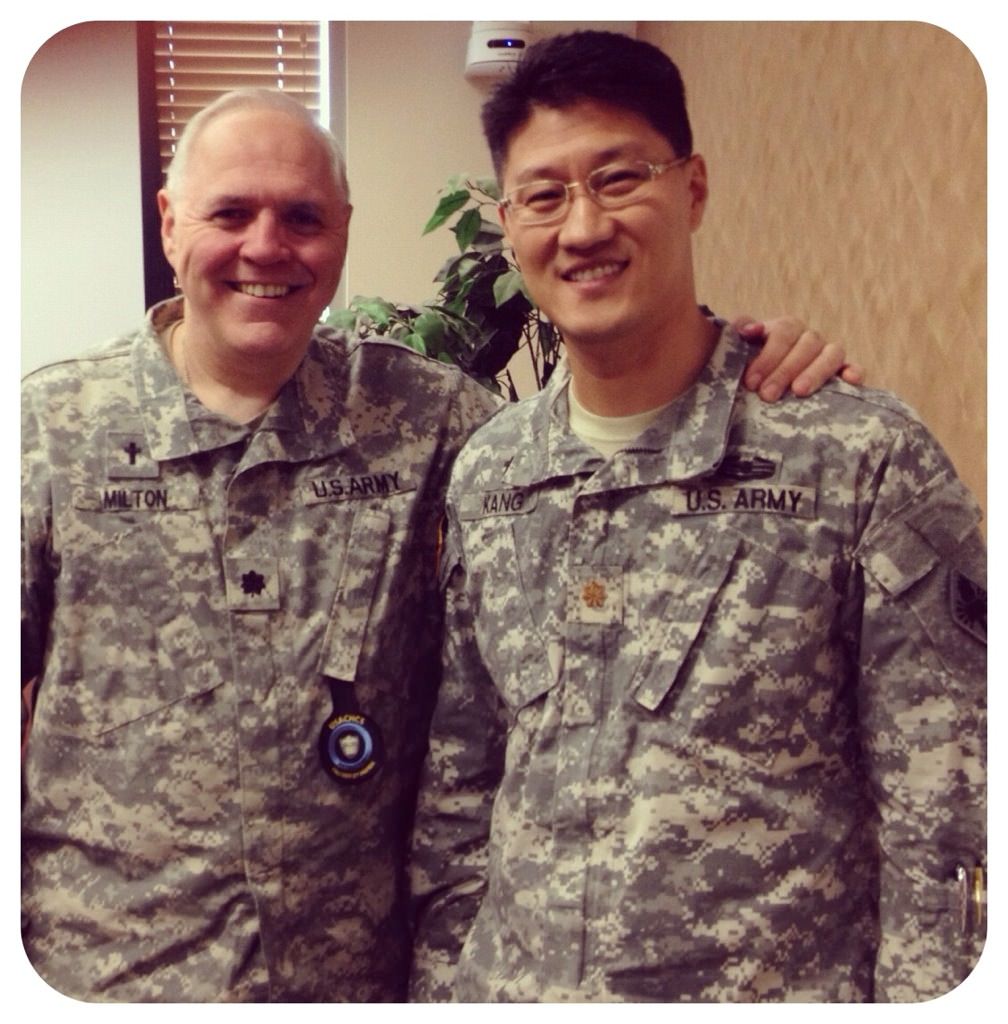 Plutarch wrote, “The mind is not a vessel to be filled, but a fire be kindled.”

Sacred fires—keen minds—are being kindled at the US Army Chaplain Center and School. And I get a front row seat at what I believe is a national treasure. The US Army Chaplain Center and School prepares chaplains for service to “God and Country” through expressing ministry to soldiers and families (and as I saw in a recent photo, little Afghani children). I will tell you why I am honored and humbled to serve here and why I believe it is indeed a national treasure:

The US Army Chaplain Center and School is a national treasure because of the mission.

The mission of the “School House,” as it is affectionately known by chaplains around the world, is to prepare religious leaders to become chaplains and to prepare chaplains (and the enlisted part of our “unit ministry team”—our faithful chaplain assistants) to become better at what they do. Now there is an official mission statement, but that is my own. So what about this mission qualifies it as a national treasure? The mission impacts the soldiers (and through the Armed Forces Chaplain Center here, also, impacts the sailors, airmen, guardsmen, and Marines of the United States Armed Forces) who guard our freedoms. Indeed, one can hardly speak of freedoms without mentioning that the military chaplain guards the first amendment of freedom of religion. General George Washington made sure of that free expression of religion when the Father of our Country founded the chaplain corps:

‘The Honorable Continental Congress having been pleased to allow a Chaplain to each Regiment, with the pay of Thirty-Three Dollars and one-third dollars per month – The Colonels or commanding officers of each regiment are directed to procure Chaplains accordingly; persons of good Characters and exemplary lives – To see that all inferior officers and soldiers pay them a suitable respect and attend carefully upon religious exercises. The blessing and protection of Heaven are at all times necessary but especially so in times of public distress and danger -The General hopes and trusts, that every officer and man, will endeavor so to live, and act as becomes a Christian Soldier defending the dearest Rights and Liberties of his country.’

Well, that pretty much settles the matter of chaplains in the military from this citizen’s standpoint. And citizens will be happy to know that the vision of General Washington and “the honorable Continental Congress” remains central to the critical role that chaplains carry and it is this vision that is inculcated with wisdom and respect for all at the US Army Chaplain Center and School. Yes, the diversity of religion in America has broadened and chaplains are called to minister within that plurality. Yet in the midst of so much political correctness, the military chaplaincy and the United Stated Army Chaplain Center and School in particular, remains a beacon of light for the right to express religious faith while wearing the uniform of this great nation. If that right is infringed upon here, in the military, then it cannot continue to stand in the civilian world. But it does stand and I thank God for that. I thank God for the right to pray and preach as a Christian, and to stand for the right of others to bear their faith as well. It is in this context of cooperation without compromise that religious leaders stand shoulder to shoulder to provide for the spiritual needs of this Army.

The US Army Chaplain Center and School is a national treasure because of the leadership.

I have truly met some of the finest educators and administrators and support personnel here. Indeed, this is a breeding ground for future Chiefs of Chaplains. There is a lot of intellectual “fire power” here and it is stimulating and exciting to minister in this cadre of professional educators. I can honestly say that I have learned more about the profession of teaching here than anywhere else. Yet beyond that is the shear caliber of leaders who not only pass through these halls, but who occupy these classrooms and offices. There is also an assembly of uniquely gifted civilians—educators and other professionals—who undergird the mission of this great academy with unsurpassed professionalism. Together with the officers and enlisted members of the unit ministry team—active duty, national guard, and US Army Reserve—the spiritual leadership needed to support General Washington’s general order remains impressively strong.

The US Army Chaplain Center and School is a national treasure because of the faculty.

On any given day, a routine trip to the coffee pot can turn into a Greek forum-like experience of highly educated and experienced chaplain faculty talking about freedom of expression, or ethics, or homiletics, or a new pedagogical method. The camaraderie is tremendous. I can honestly say that I have never served with more interesting, motivated, and expert men and women.

What really gets me is that these men and women serve God and Country by investing their lives in the lives of others who will serve. It has been said that there is no greater power than “compounding.” If that is right, then there is great power going on here because there is an amazing display of “compounding”—multiplying—ministry that will impact hundreds of thousands of human beings around the world and through the generations.

The US Army Chaplain Center and School is a national treasure because of the ethos.

An ethos of excellence, of total commitment to God and Country, of service to others, and of spiritual formation pervades this place. It comes from the office of the Commandant, to be sure, but it also comes through the zeal and wisdom of the faculty and the collaborative environment that is encouraged between faculty and students. Through innovative classroom technology, an ongoing pursuit for increasingly imaginative, proficient, and quality classroom experiences for the learner, the US Army Chaplain Center and School exudes a spirit of constant improvement and consequential distinction.

The US Army Chaplain Center and School is a national treasure because of the students.

The military chaplain takes Church to the troops. The Army chaplain will have some interesting pulpits in his career. He will stand on tanks on the Lord’s Day in a desert, or walk the floor, bed to bed, in an Army hospital, or console families and oversee funerals at places like Arlington, or minister through counseling to young soldiers still trying to make sense of a pain in their past, or a mistake in their present. The chaplain will minister to troops as he goes airborne or as he makes camp in a mountain. Wherever the troops are, there is the chaplain. So it takes a special sort of seminarian, or pastor, or other religious leader, to step out and minister in this way. It is unconventional. But just ask those who come here as students and they will tell you:, “Sir, I am living the dream. That is why I want to become a chaplain.”

The US Army Chaplain Center and School is a national treasure because of the outcomes.

It is my honor to work with chaplains in not only the “Basic” course, that welcomes newly endorsed religious workers into the military ministry, but also what is called “the Career Course.” This is a special time in the career of a chaplain when that leader returns to the “School House” to get equipped for further service and greater responsibility. The bottom line? These chaplains return to the field or to the installation, to the places where our soldiers are, our Army families are, and minister for outcomes. They minister for healing, for hope, for peace, for wholeness. Christian chaplains practise “cooperation without compromise” with other religions now in the Army. That cooperation without compromise approach allows Christian chaplains to preach Christ, to pray in Jesus’ name, and to offer counseling from the Holy Bible, from Genesis to Revelation. The rabbi also cooperates with Christian chaplains where he can and then, without compromise, ministers out of his own faith. The outcome is that human beings are being spiritually fed. Human lives are being changed. The soul of the warrior is touched by the words and ministrations of the “man of God” and the “the holy woman” of the Lord who have given their lives the continue to answer the call of General Washington, and more importantly,the call of God.  Some have said that there is a whole new generation coming into the Army less ‘churched’ than the previous generation. Yet when they arrive in the US Army, or Navy, or Marines, or Air Force, or Coast Guard, they will learn: the chaplain is the repository of humanity, of truth, of hope, and of life and is prepared by an outstanding organization called the US Army Chaplain Center and School to bring that humanity, truth, hope and life to each service member, for God and for Country.

This is what General George Marshall knew when, in 1941, he gave a speech on morale and the Army and said this:

Marshall went on to say,

“the determining factor” [in war is] “something wholly spiritual” [and that it is] “what men believe that make men invincible (see the George Marshall Foundation site).

In other words, General Marshall knew what Washington knew, what Lee and Grant knew, what Patton knew, what Eisenhower knew, and what our military leadership knows today. The chaplain and the chaplain assistant are souls being kindled by a sacred fire so that they can “light” the souls of other who carry on the fight to defend our nation. I am writing this because I see that sacred fire burning brightly right here at Fort Jackson; right here at the U.S. Army Chaplain Center and School.

What an honor to serve. What a blessing to serve here. What a privilege to do so as a minister of the Gospel. What a treasure, a true national treasure.