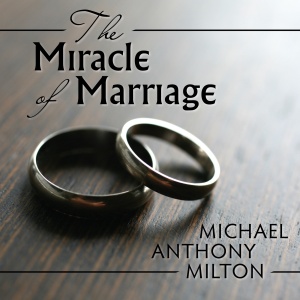 A new single was released today on iTunes: “The Miracle of Marriage:” http://bit.ly/3vzTuq

The song came as a result of preparing to speak at a Strong Bonds retreat, which is a marriage retreat for soldiers and their spouses. I was so moved by the event, and by the fact that I would be conducting marriage renewal vows, that I wrote and recorded this song.

The Miracle of Marriage is released by Bethesda Words and Music, produced by my friend Steve Babb, with vocals by Miss Cindy Gibbs, and piano and string arrangement, and percussion by Fred Schendel. Steve Babb played bass, and I prayed acoustic guitars and provided the vocal. We cut it in Charlotte (at Concentrix Studios) and at Sound Resources in Chattanooga. It is the first installment on the next collection of songs. I am working on them now and am ready to go back into the studio for some more.

My prayer is that this song will be a blessing to your marriage. And maybe even a “miracle.”

The Miracle of Marriage

© 2009 Words and Music by Michael Anthony Milton; © 2009 Bethesda Words and Music, BMI
In the beginning when time began
God took a rib from a sleeping man
And fashioned a woman to make humanity
This is how it came to be
And He called for the man to love his wife
With all of his power for all of his life
And He called for the woman to honor her man
This much we understand
But there’s more to the song
Because something went wrong
And the good that God made became flawed
But the miracle of marriage is God
When a man and a woman fall in love
No Cupid shoots arrows from Hollywood
But when love becomes commitment
And commitment turns to vows
The angels begin to applaud
For the miracle of marriage is God
Don’t tell me that a marriage that began with such power
Must be thrown overboard for the sea to devour
When there’s grace from the One
Who speaks stillness to the sea
And who welcomed a sinner like me
Say, Honey, I’m beginning to see
That the elderly couple in the nursing home
Holding hands in a world that seems all their own
Must have come through times of struggle and
Must have come through times of pain
And yet this special love remains
Because a long time ago
Each of them had to let go
Of their own lives to find this love
And the miracle of marriage is from above
Yes the miracle of marriage is His love