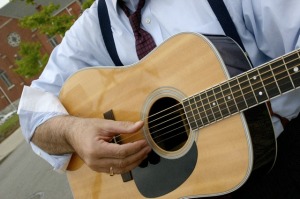 I spoke at a church named Sovereign Grace Presbyterian Church this morning, here in Charlotte. As I prepared to speak, I spotted a six string acoustic Taylor sitting behind the lectern. The name of the church, Sovereign Grace, and the sight of that old guitar was just too much. I began my talk to the men of the church with a song. And I have found that in that old guitar, and in reflecting on His sovereignty, God gave me a glorious moment of the Spirit’s refreshing presence.

I played this song, He’s in Control (which Christian Focus Publications is now graciously featuring on their web site for a free playing; I hope you get to listen, especially to the beautiful string arrangement by Fred Schendel of Glasshammer; and the guitar on that recording was not a Taylor, but my faithful Martin D 35) was the first song that I wrote, back 1985, after I came to understand God’s sovereign grace. I who had blasphemed the faith I had been taught as a child, through prodigal living and later religious strivings, would be born again through encountering the power of His sovereignty, the death of my life and the indwelling of His own. Life has never been the same since. Funny how an old guitar can do so much. Or was it the guitar?

Oh how I pray that with each passing day, I and all of us who follow the Nazarene, come to love Him more than the day before, so that at His appearing, either in our deaths or His return, we will know Him not as the unfamiliar Deity but a faithful Friend who was, as Psalm 42 puts it, “the God of my life.”